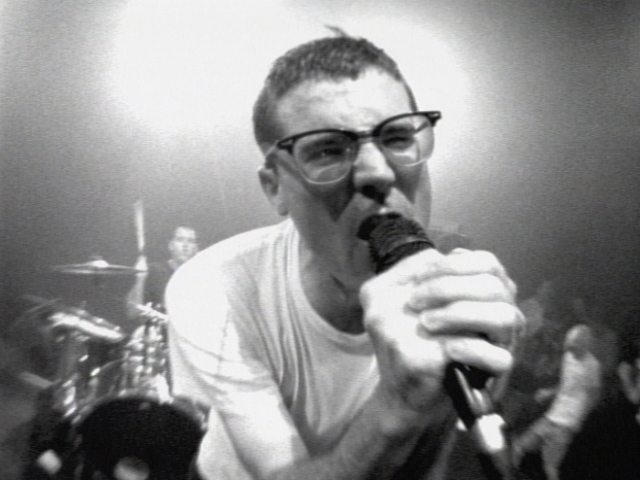 Three years in the making, the highly-anticipated Filmage: The Story of Descendents/ALL, is now finally on the festival circuit. An unabashed love letter to the band(s), Filmage follows the convoluted twists and turns of the classic pop-punk unit, from the VFW halls of the late ’70s L.A. punk scene to their triumphant return at Austin’s Fun, Fun, Fun fest in 2010.

The story of the Descendents is one of the quirkiest in all of punk rock history. Formed in 1978 in Southern California, the band’s caffeinated take on girls, parents, food and flatulence has gone on to inspire a legion of melodic punk bands, members of which appear throughout the film to speak to the band’s lasting influence.

Filmage is anchored by Bill Stevenson, the drummer, songwriter and general cheerleader for Descendents/ALL. His manic enthusiasm and uncompromising work ethic are shown to be the backbone of the band, holding things together through their frequent line-up changes and singer Milo Aukerman’s higher learning pursuits (he has a PhD in Biology).

It was Milo’s decision to leave the band in the late ’80s to concentrate on his science career that led to the formation of ALL, essentially the Descendents with a revolving cast of frontmen. The long and difficult slog of ALL to forge their own identity in Milo’s bespectacled shadow, and Stevenson’s life-threatening illness in 2010, add some emotional heft to the film, and make the Descendents’ eventual return to the stage that much more triumphant.

I caught up with Filmage director/producer/writer Matt Riggle via e-mail to discuss how the movie came to light.

Gabriel Sigler: What’s your background with the Descendents and when did you hatch the idea for Filmage?
Matt Riggle: When I was 13, my older brother got his hands on the newly released (ALL’s 1992) “Dot” cassette single. I had been into punk for about a year but had never heard music like this. They were so tough and melodic, and I’d never seen a band with so many strong songwriters sound so cohesive. I loved the look of their records, too — the covers, the sparse use of pictures, the consistent typesetting. And the fact that the drummer wrote these great songs and produced was insane to me.

In 2004, my band (41 Gorgeous Blocks) got to record with Stephen Egerton at his studio in Tulsa. My bandmates, including co-director of the movie Deedle LaCour, and I were so excited that we spent the vast majority of our paid studio time asking Stephen questions about his band and making him play stuff on guitar. The idea for the movie came about in those sessions, if I recall. But sometime around 2009 or 2010, Deedle began to talk about doing it for real. We wrote up a bunch of ideas and sent them to the band and started officially rolling tape in late 2010.

GS: Filmage took over three years to complete — what were some of the setbacks that occurred?
MR: There weren’t really any hold-ups, except that it was just a tiny crew — four of us, to be exact — working on a gigantic project. The band has been together well over 30 years, so to research and tell that story takes some time.

The first couple years was a lot of travelling around the country, gathering hours and hours of interviews, over 50 interviews total. Then I transcribed everything — I have a 500+ page document of interview transcriptions — so we could make sense of it all and write a script.

Meanwhile, Deedle and Justin Wilson, our DP, were scouring the earth to find pretty much every old photo and video that exists. When James Rayburn [lead editor] and I started putting together the first version of the movie, interviews and trips were still happening, each of which changed the direction of things slightly. Then the task of utilizing all those pictures and videos came into play. So yeah, it’s been nearly three years since shooting began and almost two since editing began. The movie was done earlier this year, but then we had to deal with the business side of things, licensing and whatnot. And that stuff takes just as much energy as making the movie itself.

GS: You interview many of the major punk figures, but was there anyone you wanted to include that didn’t work out?
MR: We pretty much got everyone we asked. This band is so admired that people were lining up at the chance to gush about them on camera. I do really wish that we could have talked to Frank Navetta [original guitarist and founding member who died in 2008]. He sounds like quite a person. I didn’t know anything about him before we started working on this, but now I know that we fans owe him such a debt of gratitude.

GS: Why focus the film on Bill Stevenson and not on Milo, who’s the most well-known member of the band?
MR: We chose that path early on because when you look at the history, all roads lead to Bill. Frank Navetta started the band, but Bill took it and carried it all those decades. He’s the driving force in so many ways. And the first person who will tell you that is Milo.

GS: Finally, Descendents or ALL?
MR: I’m one of those fans who view it as one band with different “eras.” I love each singer’s voice and each member’s songwriting contribution and simply couldn’t choose a favourite if I tried. That being said, “ALL!”. ■