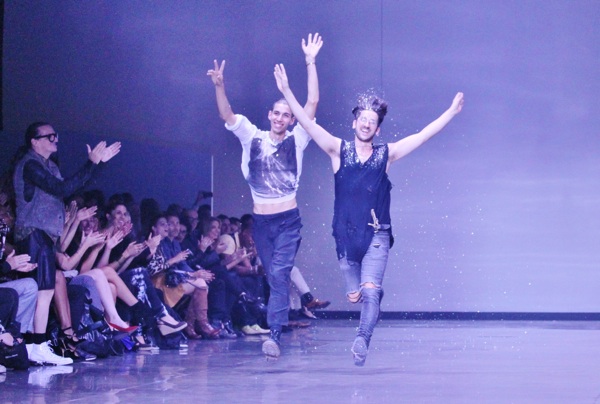 To celebrate the 25th anniversary of Montreal Fashion Week, Groupe Sensation Mode invited designers to present their runway shows without paying the usual participation or production fees. Over the weekend, more than 20 established and emerging designers unveiled their Spring/Summer 2014 collections.

Some of the highlights of this year’s Fashion Week included Mélissa Nepton’s new collection, which retained her flowing cuts but was targeted at a younger group of women. The Montreal-based designer recently won a competition to create a collection for Target, and she told fashion journalists that she is happy to divide her time between her family and her work on the collections.

Another highlight was the finale of the runway show by UNTTLD, with the two designers (Simon Bélanger and José Manuel St-Jacques) running across the catwalk to a standing ovation from their former mentor, Denis Gagnon.

Marie Saint Pierre, one of Montreal’s well-established designers and president of the CCMQ, has not produced a runway show since 2011, but this year she instead presented her new work at a pop-up designer shop, the Cabinet on Ste-Catherine, telling journalists that “we always need a level of presentation that is equal to what is going on internationally. We don’t have top models. We lack a perspective of greatness. We are too regional.’’

Unlike other international fashion weeks, which are often criticized for their racial inequality, this year Montreal demonstrated balance and diversity, with models of all races represented.

Grace Kelly was a recurring inspiration for this year’s designers, from Christian Chenail’s runway show to Denis Gagnon’s Flash Mode mannequin tableaux, plus the legendary Montreal designer Jean-Claude Poitras delivered a public lecture at the McCord Museum, where the Grace Kelly exhibition continues until October 2013. As Coco Chanel famously remarked, “fashion changes, but style endures.” Kelly’s timeless chic continues to fascinate and inspire designers, curators and audiences worldwide. In light of Montreal’s efforts to be more internationally renowned and connected, and the ensuing discussion about the future role of Fashion Week, channelling the Kelly image may be Montreal’s way to break out of its self-proclaimed regionalism.

But perhaps the most anticipated announcement this year was regarding the future of Montreal’s Fashion Week, after the Quebec government pulled $150,000 in funding from its budget. After heated rumours and fears of a merger with Toronto Fashion Week to establish a high-profile international fashion event in Canada, the organizers finally announced the merger of Montreal Fashion Week and the Festival Mode et Design, both produced by Sensation Mode, as of next August. The February edition of Fashion Week will remain independent, while the merged summer edition will have two venues and two distinct purposes, one catering to the public and the other to media and buyers.

Despite the provincial government’s ongoing short-sightedness, the creative talent of the Montreal fashion scene continues to work hard to maintain and advance its cultural capital and heritage, because the organizers of Sensation Mode know, to quote Coco Chanel one last time, that, “fashion is not something that exists in dresses only. Fashion is in the street, fashion has to do with ideas, the way we live, and what is happening.” ■