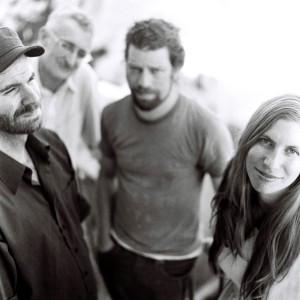 Esmerine released a pair of impressive albums in the early aughts, but aside from periodic performances around Montreal, the group was relatively silent for six years until the release of 2011’s La Lechuza, dedicated to the memory of departed Montreal vocalist Lhasa de Sela. The core of the group remains Rebecca Foon (A Silver Mt. Zion, Set Fire to Flames, Saltland) and Bruce Cawdron (godspeed, Set Fire to Flames).

Various local musicians have fleshed out the ensemble over the years, most recently percussionist Jamie Thomson (Islands, the Unicorns) and multi-instrumentalist Brian Sanderson. Their latest is Dalmak, released by Montreal’s Constellation Records, inspired by time spent touring in Istanbul. It’s their most drivingly rhythmic and accomplished work to date.

Joseph Sannicando: Can you tell us more about the residency in Istanbul and how the city shaped the direction this record has taken?

Rebecca Foon: This was all a bit of a spontaneous adventure. Our European booker was living in Turkey and we were invited to play a show in Istanbul when we were touring La Lechuza. During that trip, we met incredible musicians and were very moved and inspired by the city — we all fell in love with Istanbul. It turned out to be a bit of an epic logistical journey, but we managed to rent a beautiful loft in the heart of Istanbul, set up a little mobile studio in it, and brought the band together with musicians from Turkey for almost three weeks. Those recordings form the heart of Dalmak.

JS: Have Middle Eastern musics influenced Esmerine prior to this stay in Turkey? The massive finale of [sophomore LP] Aurora, “Histories Repeating as One Thousand Hearts Mend” had tinges of influence throughout.

RF: It’s interesting to look back at it now — yes, absolutely, that piece has Middle Eastern influences. It’s a song we’ve been re-interpreting with the eight-piece Dalmak band as well, not surprisingly. Bruce and I have each explored that sensibility in our respective prior projects and through the music made by others in our community, like Sam Shalabi [Land of Kush etc.], Radwan Moumneh and Pierre-Guy Blanchard. It was also pretty awesome to watch [Esmerine drummer] Jamie rock out for the first time with Hakan, who’s an amazing Turkish percussionist — you could tell it was a dream come true for both of them.

JS: Does Istanbul really have the best bread on Earth?

RF: Istanbul not only has the best bread on earth, but the best food on earth. I pretty much melted in my seat every time I put food in my mouth!

JS: How has your live show changed?

RF: We have grown from a quartet to an eight-piece band for this Canadian tour for Dalmak and we’re thrilled to have two musicians from Turkey joining us who were part of the original recording, James Hakan Dedeoglu and Hakan Vreskala, as well as two amazing local players who’ve been immersed in Eastern styles for a long time, Jérémi Roy and Hraïr Hratchian.

This is the most energized and groove-based music Esmerine has made and we’re super excited to be able to present it with the big band.  ■