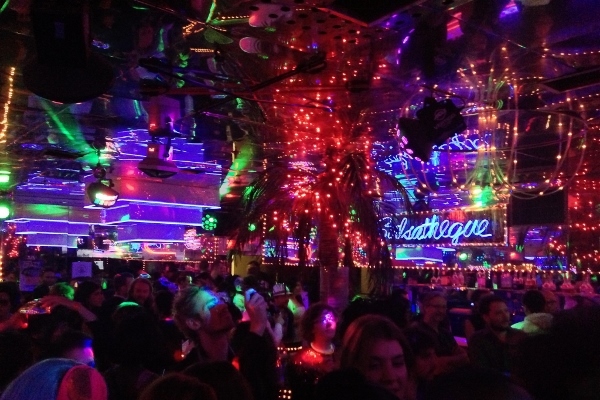 Arcade Fire played eight new tunes at last night’s not-so-secret show at Salsathèque, the (local) climax of an elaborate viral marketing campaign for their new single “Reflektor” (read all about it here).

The venue is an old-school disco downtown with a mirrored, metallic interior illuminated by lights in the floor, neon on the walls, Christmas strings, ceiling rigs that shoot colour around the room and tropicalia in excess. We were all wondering, “Why Salsathèque?” and between the look of the space and the African (ie. Haitian) sounds the band has introduced to their palette, it makes a lot of sense. And guess what? You may still have a chance to see Arcade Fire there.

When was the last time you lined up for a show for seven hours? It’s not a first for me, but it’s been a while. Like the ’90s, maybe when Bowie played Metropolis. I regressed to my fangirl ways because I’ve missed a lot of these guerrilla Arcade Fire gigs, including the one they played at Salsathèque last week (for friends & family, mostly). When the “secret” spilled in the media (social and otherwise), and I heard that formal wear or costumes were called for, I pulled my gothic lolita outfit out of a trunk and gunned down there for about 2 p.m. The queue was already 30 strong, and despite the doorman’s efforts to weed out interlopers, that number grew over the hours. I was lucky to get in, and some of the hundreds of other people in line got a bracelet for a show happening there tonight.

A dress code was in effect because everything was being filmed, and throughout the afternoon, people in line were encouraged to acquire better clothes if they didn’t pass muster. Some chose to leave, but I witnessed many hand-deliveries of pants and shoes by moms, girlfriends and buds. Local scenester and fashion bro Cary Tauben was tasked with choosing the 20 best costumes from the crowd, and shortly before doors opened, he brought the lucky few up to the front — apart from guaranteed entry, they got free copies of the 12-inch single, which was being sold at the door along with t-shirts (one of each = $25). (The B-side of the single, if you’re wondering, is an instrumental — or dub — version of “Reflektor,” and it comes with a download code.)

The band made their entrance to the venue on Peel, twice. Figures wearing giant papier mâché-style heads (as seen in the kind of underwhelming Anton Corbijn-directed “Reflektor” video) emerged from black Escalades and paraded down the block slapping the hands of screaming fans. Some of them were clearly decoys, but the excess number of band members had us excitedly wondering whether David Bowie (who sings on “Reflektor”) was going to make an appearance. That was too much to hope for. See our video of their first entrance, here:

The personnel was a surprise in itself: Violinist Marika Shaw was absent, and added to the usual mix were Owen Palett (a part-time band member from way back), who alternated between keys and violin, two black percussionist dudes (congas and assorted bells and blocks) and one black female dancer, who did some moves with Régine when the band took the stage and later led the crowd in a rudimentary choreography that the she’d taught the first 40 bodies through the door on their way in, in the dance studio on Salsathèque’s first floor.

As someone who remembers the ’80s, images of Peter Gabriel in terrible clothes pulling African-esque moves immediately sprang to mind. I’ll leave it to some politically correct quasi-academic blogger to address the issue of cultural appropriation — that criticism is inevitable — but I will say that what Arcade Fire is doing sounds and looks cooler than the safari-pop trend of the ’80s, not to mention the white-bread Afrobeat affectations we’ve been hearing from a lot of indie pop bands lately. Also, if you know about Arcade Fire’s long relationship with Haiti, that they’ve injected some black rhythms and synth sounds and moves and “exotic” face and body paint into their aesthetic is not surprising at all.

The new look is dramatic, particularly the faces. The girls had heavyweight black eyeliner bordering on goth, while the guys had smeared warpaint, smoky raccoon eyes and, for part of the set, cotton coverings with eye holes (these were reserved for Win and Will Butler). As the band played the opening strains of “Reflektor,” there was a hand on my shoulder and a tall guy with said mask shoving through the crowd to the front. Typical Win.

“Reflektor” is a crazy good tune, and it killed to the point where I felt like I was in danger. The crowd swayed and crushed and pogoed and clapped and hollered throughout the set, but luckily it calmed down about 10  per cent after the one song that anyone knew was over. The rest of the show had rhythms to move your booty to (seriously), straight-up blues rock, a touch of the old orchestral pop, a Stones-ey classic rock number (they’ve been spending time with Mick & Keef, remember), ’80s synths (one song started out very “Billie Jean”) and a particularly impressive anthem that had me thinking New Order.

Then it was done. No encore, no old songs, just the band hanging out in a room with fans and assorted music scenesters, dancing to hits of the ’70s and ’80s (“Superstitious,” “Fame,” “Roxane,” “Personal Jesus”), signing autographs and eventually bringing out an iPhone-shaped pinata full of candy and condoms.

The new material is promising, and as always, Arcade Fire played a great live show. The thrill of seeing them in a small venue again (it’s been a decade) and being part of such an exciting and unusual event was worth the wait. I’ve heard that there will be at least one more of these after tonight’s presumably sold-out Salsathèque show, but you’ll have to seek out more details via word of mouth. Keep checking the band’s website and social media and posters on the street. And look out for a tall guy in a white, painted suit with a bag on his head. He’ll tell you what’s up. ■