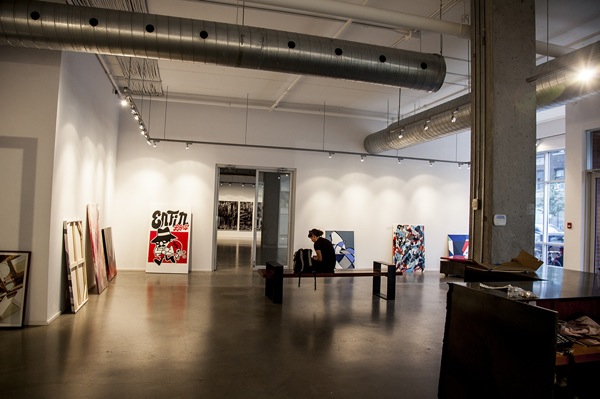 Setting up pre-show at Yves Laroche.

The next time you see a piece of graffiti, don’t just look at the letters — look beyond them. You might find yourself lost in the patterns and colours of the “fill-in,” the space that fills a letter outline. The artistry this space enables was the springboard for the Yves Laroche Gallery’s latest show on abstract exploration in graffiti, From Lines Into Abstraction. According to gallery co-curator Louis-Nicholas Coupal, seeing beyond the lines is all about perspective.

“I’ve had these conversations with the writer El Mac, who does figurative, very realistic portraits. But if you look closer, there’s also a very interesting stylistic use of pattern in the backgrounds,” Coupal says. “If you were to take one of his pieces and crop it into smaller sections, they’re interesting as abstract works of their own.”

That freedom to create and see in a new way extends to the show’s artist roster. Planned with guest curator and international graffiti star RESO, From Lines Into Abstraction features 22 artists from across the world, such as KEMS (U.S.) and Remi Rough (U.K.). It also features Canadian talents Alex Scaner, STARE, Tchug, Zek One, Kwest and Bacon. Although not every artist invited is known for their abstract work, Coupal says that’s part of the experiment.

“It’s been so exciting to receive and unpack the artwork this week, and see how each artist has navigated the theme of abstraction. Some of our artists, like 123Klan, Greg Lamarche and even Cope2, don’t usually work in abstraction,” Coupal says. “Some have chosen to experiment with gradient, and others are breaking free from the letter outline completely. It’s a huge variety.”

And although abstract art causes less of a stir these days than in the 19th and 20th centuries, Coupal believes it’s still relevant to graffiti’s experimental creative process.

“Abstraction set out originally to communicate an emotion or a feeling, rather than to show a figurative piece. Of course, it’s not that shocking anymore, and we’re used to it,” Coupal says. “But because abstraction is part of the creative process of graffiti, for example, in a fill-in, I think graffiti writers look at it in a different way. A way that still looks for the balance, the relationship between colours, the emotions in abstraction.”

Local graffiti writer STARE will also be launching his book Star d’un Soir, bearing the same name as his recent exhibition at the Yves Laroche Gallery, during Thursday night’s vernissage. American writer KEMS will also be debuting a signed and numbered print.

Visitors to the vernissage will be treated to beats by the Sommelier Acoustique and will have the chance to enjoy a glass of Bulle de Neige. ■