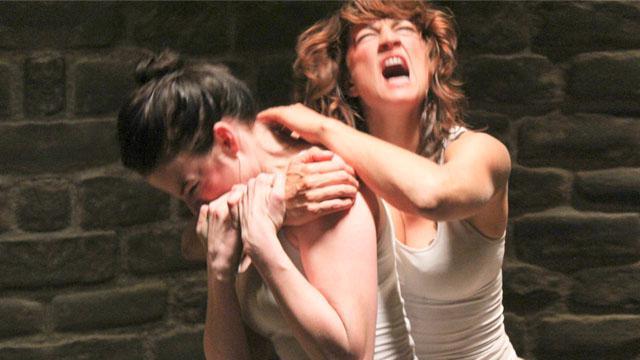 New Zealand native Zoë Bell has managed to climb from being Lucy Lawless’s stunt double in Xena: Warrior Princess to working with Quentin Tarantino as Uma Thurman’s stunt double in Kill Bill: Vol. 1 and 2—not to mention acting in Death Proof, and appearing in Inglourious Basterds and Django Unchained. In the last couple years, she’s taken on acting roles in Drew Barrymore’s 2009 roller derby movie Whip It and the recent Tom Cruise vehicle Oblivion, and has now produced and starred in Raze, which is having its international premiere at Fantasia. I think it’s pretty safe to say this is only the beginning for Bell.

Raze is likely her most challenging role to date. She plays Sabrina, one of many women trapped in an all-female dungeon, where inmates are forced to fight each other to the death—only the champion gains her freedom.

“When they first came to me, it was a version of a short film and I really liked the idea—[but] I had a bunch of other stuff on,” explains Bell. “So then they came back to me and said that they’d like me to be involved and offered me a producing role on it. At that point, I got really interested.

“When I first heard about it, the role was tiny, tiny, tiny—like a cameo role. So it wasn’t until I came on as a producer that it turned into a feature and Sabrina became the way she is now. It sort of happened a bit backwards. It’s not like I saw the role of Sabrina and came on board. It’s like I came on board and then Sabrina happened afterwards.”

Raze, which also stars Sherilyn Fenn (Twin Peaks) and well-known monster actor Doug Jones (Hellboy, Pan’s Labyrinth, Fantastic Four) was shot over a four-week period, with the cast and crew working long hours, six days a week. Bell says it was an intense experience. “It was physically demanding but also emotionally demanding. Sabrina’s journey is pretty harrowing … I think I can speak on behalf of all the girls, even if they were just on [the set] for three or four days—it was an intense three or four days. At the end, I was basically ready to sleep for a couple of months,” says Bell.

The film’s reception has elicited love-it or hate-it reactions. “We’ve had people walk out, we’ve had people stay in the theatre just to be angry at the end when we do a Q&A—so they can tell us they’re angry. Then we have people who are are absolutely in love with the movie, who are all super excited. It’s been really interesting,” says Bell.

“We’d rather polarize than have people be indifferent. We don’t want indifference—that’s just boring. Then you didn’t make anything. I certainly expected it to be effective to some people, but I certainly never came out with the intention of shocking people. We did, definitely, want to have something that people hadn’t seen before … I’ve never experienced female fights that are emotionally this real and visceral.” ■