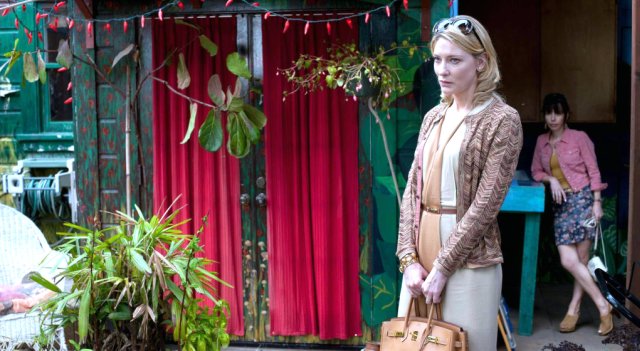 Clearly the most highly anticipated film this week is Morgan Spurlock’s (Super Size Me) boy band doc One Direction: This Is Us. (I kid.) The flick follows the boys on tour and back to their respective hometowns, ending with a 3D performance at London’s O2 Arena. You can read Alex Rose’s review here, where he suggests that the glossy film still hints at the “sadness of über-fame.”

Selena Gomez continues to break away from her Disney image and choose some interesting roles — she joins Ethan Hawke in Getaway (no relation to the Steve McQueen flick The Getaway), where the pair drive around running errands for a mysterious villain who has kidnapped Hawke’s wife. If you dig fast cars and explosive action, this one is a safe bet.

Woody Allen’s newest, Blue Jasmine, stars Cate Blanchett as the middle-aged wife to a wealthy Alec Baldwin. When the authorities discover that he’s really a crook, she loses everything and has to go live with her sister. Mid-life crisis flick though this may be, it looks like we may hear a lot about Blanchett come Oscar season.

John Crowley’s Closed Circuit stars Eric Bana and Rebecca Hall as ex-lovers and defence lawyers whose client is a man accused of bombing a London market as an act of terrorism. When more information starts to unfold about the case, there is suspicion that the British Secret Service may be involved.

Wong Kar-wai (In the Mood for Love) fans will be pleased to know that they can check out his latest — The Grandmaster. The film tells the history of Ip Man, who is famous for being Bruce Lee’s martial arts trainer.

At Cinema Excentris, you can also check out local filmmakers Santiago Bertolino and Hugo Samson’s documentary Carré rouge sur fond noir, about the 2012 Student Crisis in Quebec. You can also read our interview with the directors here.

And at Cinéma du Parc, you can check out the documentary Casting By, which sings the praises of casting director Marion Dougherty and her pivotal role in filmmaking. The flick includes cameos from Jeff Bridges, Robert De Niro, Robert Duvall, Clint Eastwood, Al Pacino and more. ■
http://www.youtube.com/watch?v=R1EHFoE9uB0