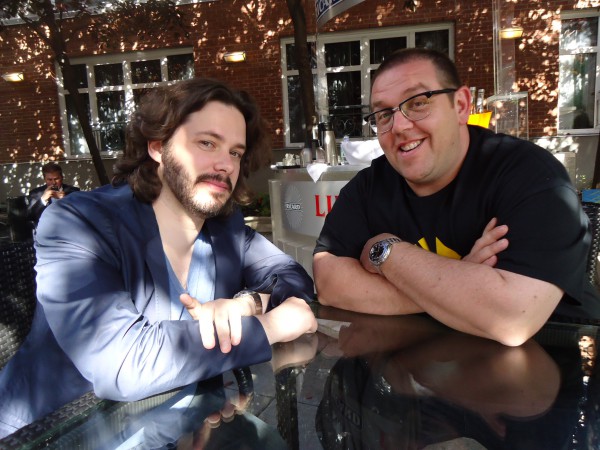 Almost every project that British director Edgar Wright takes on gains a cult following. From the TV series Spaced to movies like zombie comedy Shaun of the Dead, action comedy Hot Fuzz and the adaptation of Bryan Lee O’Malley’s Scott Pilgrim comics, Scott Pilgrim vs. the World, he’s managed to make every effort feel like a coveted, referential, quotable piece of film history.

In his latest film, The World’s End, which rounds up the “Cornetto trilogy,” he reunites with actors Simon Pegg and Nick Frost to tell the tale of five friends trying to recreate a night out/pub crawl they attempted as teens, 20 years after the fact. I sat down with Wright and Frost when they were in town for the film’s Fantasia festival screening to chat about nostalgia and ice cream treats.

Kayla Marie Hillier: Calling Shaun of the Dead, Hot Fuzz and The World’s End the Cornetto [British version of a Drumstick] trilogy — was this something you guys came up with?
Edgar Wright: It came out of a joke in an interview after Hot Fuzz. We had had Cornettos in both Shaun of the Dead and Hot Fuzz, and the journalist started saying, “Are you going to do a third film featuring a third flavour of Cornetto?” And I said, “Yes, it’s going to be like Krzysztof Kiešlowski’s Three Colours trilogy. It’s the three flavours Cornetto trilogy.” So that was like a silly joke which then kind of stuck as a thing. But then we started to think about it more when we wanted to make a third film together. We did think there were linking themes throughout the movies — that we could make this a thematic trilogy. They’re not the same characters, but they all have the same sensibility.

KMH: I hope by calling it a trilogy that this isn’t marking an end to the three of you working together.
EW: We’re going to make stuff together. I think this third film makes this a piece, and it’s the end of this. But we’d like to make more stuff together in the future.
Nick Frost: We never just want to rush in and make something because it’s expected of us now to go and do something else. We have to hatch an idea. If it takes us six years, then it takes us six years. And at the end of that, hopefully we’ll have another film that people get excited about and will come out and see, as opposed to thwapping something out every two years that eventually people just get bored of. We’d much rather do it that way.

KMH: The film really is about nostalgia and that element of coming home to find that things have changed. Do you think it’s ever possible to actually go home again?
EW: Gary King’s problem in the movie is that he thinks that he can recapture a moment, which he can’t. And you can’t go back in time. You can never go home again; you can never be young and innocent and naive like that again. He’s doing a very dangerous thing by trying to recapture that night, and it goes as badly wrong as it can possibly go. The threat in the movie is nostalgia itself. Almost like nostalgia is more dangerous than the aliens.
NF: As soon as you leave [home] for any period of time, it’s terminal. Each time you come back, you’ll notice it withering slightly more.

KMH: The film’s soundtrack is incredible. To be fair, though, all of your films tend to have epic tunes. How’d you compile this one?
EW: The soundtrack is our suggestions. Basically, what happens is — in the case of this one — we wrote the script listening to songs. So we made a playlist that was about 200 tracks long with songs from 1988–1993, which was the time that me and Simon were in school, in college. And very quickly some rose to the top, even becoming plot points in some respects. We actually quote lyrics from Primal Scream, Soup Dragons, Happy Mondays within the movie. So, I think it’s also important to the theme because one of the positive forms of nostalgia is through music. Music being your sense memory back to a time. That’s a lot more pleasurable and easier to navigate than trying to recreate some great night that you had when you were 19.
NF: It’s best to do it like that. You can do the same with photographs or food, you know.
EW: Time pie.
NF: Time pie. My mum used to cook me beef stroganoff when I was 10, and I now cook it and it tastes exactly how she cooked it. So even though I don’t have a mum, when I eat that, I have a mum again. That’s really powerful; that’s really important. And that’s the way to do it.
EW: Time and relative dimensions and stroganoff.
NF: And stroganoff.
EW: Your beef TARDIS.
NF: Exactly.

The World’s End comes out this Friday, Aug. 23