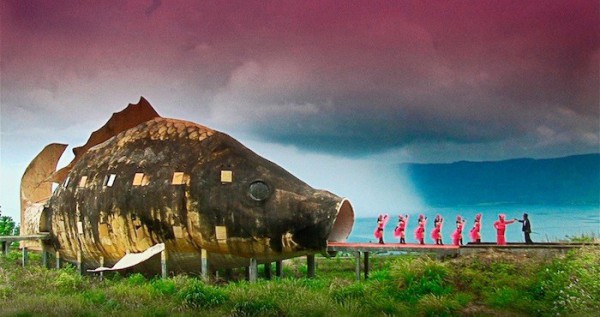 The Act of Killing

Joshua Oppenheimer’s doc The Act of Killing, executively produced by Werner Herzog and Errol Morris, finally hits Montreal screens this weekend after becoming one of the most talked-about films of the last year.

For those who’ve missed the buzz, the film takes place in Indonesia, where a million citizens were killed (under the pretext of purging communism) by paramilitaries and thugs after a military coup in 1965. Today, the killers don’t just walk free, but bask in power and praise. They not only admit to having killed, tortured and raped people; they boast and joke about it.

Oppenheimer’s big conceptual gambit is to get the film-obsessed killers (many of whom got their criminal careers started as movie ticket scalpers) to reenact their crimes in scenes based on their favourite Hollywood genres — gangster flicks, Westerns and (I wish I was exaggerating, but I’m not) a lavish musical.

The story mainly focuses on Anwar Congo, evidently responsible for 1,000 deaths, who eagerly participates in the reenactments, as well as reviewing the scenes and commenting on them (at one point, watching himself mime strangling a man with a wire, he notes: “I never would have worn white pants”). Over the course of the film, he admits to being haunted by his crimes and feeling some remorse. But is that an act as well? In a film with so many layers of meta, it’s hard to tell.

The doc often seems to take place in an alternate universe where people are shockingly honest and candid about their misdeeds and venal nature. One gangster is shown going through a Chinese market and openly shaking merchants down for bribes; another tries to launch a political career, claiming excitedly that if he gets elected, “I can get money from everybody!” And of course, Congo and his compatriots are totally nonchalant about their crimes, not to mention the political fables they fabricated to justify them.

At times, the doc reads like a lefty’s dream of right-wing ideology laid bare to its truest essence. The Indonesian word for gangster, preman, is based on the English “free man” (at least according to the gangsters themselves), and several people in the film — from a perky talk show host to the Vice President of Indonesia — praise the gangsters for their can-do spirit. Although chilling, this kind of open embrace of thug violence is almost refreshing compared to the weasel words of Western right-wingers.

Of course, these kinds of war crimes are not tied to one political philosophy; 10 years after Indonesia’s coup d’étât, the Cambodian genocide would take place, using similar tactics under the opposite ideology. Or as Congo shrugs, “There are people like me everywhere in the world.”

The film is powerful, but (spoiler alert) there’s no sign of a hopeful or redeeming note. Though the reenactments are a bold aesthetic choice, and definitely distinguish the film from a straightforward documentary, in the end they serve mainly as a not-quite-comic relief from a story so devastatingly dark as to make you seriously question your faith in humanity.

In case you might have forgotten that we live in a distinct society, the film is screening in two versions in Montreal: at Excentris in its regular two-hour length with French subtitles, and at Cinéma du Parc in a 160-minute director’s cut subtitled in English. ■