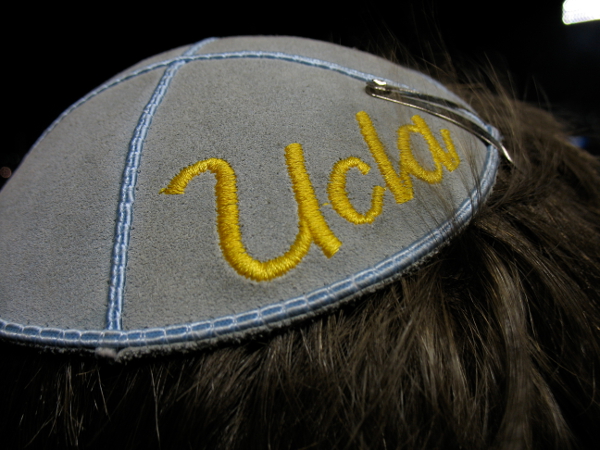 As big of a UCLA fan as you may be, Pauline Marois doesn’t want you to wear this yarmulke to your job at a hospital. Photo via Flickr

Score one for human rights: Our esteemed provincial government’s proposed ban on religious garb and symbols in public institutions — which, naturally, allows for the cross in the National Assembly to stay where it is, on the grounds that it’s an “artifact of Quebec’s heritage” — may contain an opt-out clause. What that would mean is that hospitals, schools and so on would be able to apply for exemptions from the charter. Bernard Drainville, the PQ’s minister for Democratic Institutions and Active Citizenship, has spent a lot of time this week meeting with representatives of various communities to discuss this whole thing, which, naturally, has been roundly criticized.

Though this may not win Marois and co. many new fans, their handling of the Lac-Mégantic disaster just might, a recent poll says. “Losses suffered by Québec Solidaire and Option Nationale” didn’t hurt either. But Quebecers are still in favour of their next government being of the Liberal variety. So there’s that.

Speaking of Lac-Mégantic, Montreal, Maine and Atlantic Railway looks to be resuming operations after a request to access the $250,000 it needs to buy the necessary insurance was approved.

On a national political note, Justin Trudeau, he who will lead the Liberals into the next federal election, is facing much fall-out (well, some, anyway) from his admission that he smoked pot while he was an MP. He has been what he calls “a very rare user of marijuana,” taking “five or six puffs” in his life. His brother Michel, who died in an avalanche at 23, had apparently been arrested for possessing a very small quantity of the drug, too. Anyway, Trudeau’s account of the last time he got high is awesome, so we’ll present it to you without comment: “We had a few good friends over for a dinner party, our kids were at their grandmother’s for the night, and one of our friends lit a joint and passed it around. I had a puff.”

If you’re in the market for a home, you might consider Celine Dion’s Florida mansion, which hit the market for a reasonable $72.5-million. It apparently has “all the superstar amenities” — a game and screening rooms, a tennis court and whatever else — and nearby are homes belonging to Kid Rock, Michael Jordan and Olivia Newton-John, where a man was found shot dead this week. Or you can just follow our province’s favourite chanteuse on Twitter. ■