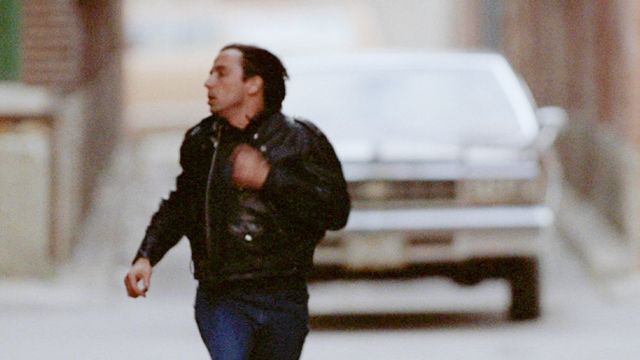 Malcolm Fraser: It’s always been one of my great Canadian Film Shames that I’d never seen Jean-Claude Lauzon’s debut, especially since his 1992 follow-up Léolo is one of my all-time favourite films (not just Quebec or Canadian, but favourite films period). I was too young to see Un zoo in theatres, and it was never released on DVD for some reason. So it seemed like a no-brainer when Fantasia announced this special screening.

But I didn’t take into account the fact that in this town, a screening of a restored classic is likely to turn into a major industry circle jerk.

Alex Rose: The restored version of Un zoo la nuit came to fruition thanks to the efforts of Éléphant: une mémoire du cinéma québecois, a Québecor venture that seeks to do no less than digitize every single movie in the history of Québec and offer it up to subscribers of Ilico’s cable services (another Québecor venture). On paper, I love the idea of Éléphant — these are movies that are hard to find in many instances, and those that do have DVD releases are often subpar.

But I don’t subscribe to Ilico (and I don’t plan to any time soon), and I certainly don’t worship at the great golden altar of Pierre-Karl Péladeau’s conglomerate (or ex-conglomerate, as he technically stepped down from Québecor to be appointed energy czar by Pauline Marois). This was bad news for me, since I came to see a supposed classic that (like Malcolm) I had never seen before. Not to hear niceties about the guy (and guest of honour of this swanky, rambling soirée) who controls the media empire that left me out of work for a year and shut down the Mirror. It’s hard to work in media in Quebec without working totally independently of Québecor, and harder still to work in media while maintaining respect for their burn-it-to-the-ground approach.

MF: But nobody seemed to care about that on this night; PKP was fêted with a hero’s welcome as he took the stage to wax rhapsodic about the film we were about to see. There were a few scattered boos from certain brave or cranky souls as he approached the podium, but in general the audience seemed to conveniently overlook his right-wing views, scorched-earth approach to labour relations, single-handed responsibility for Sun News and long-standing record as a media-monopolizing peddler of populist crap.

Unfortunately, PKP’s speech was only the opening salvo in an introduction that went on for a shockingly long time.

AR: First up to the podium after PKP’s speech was notorious pervert elf of the Québec media landscape Claude Fournier. Once upon a time, Fournier made a bunch of movies in which naked people fell out of windows to the sound of slide whistles, which qualified him as the most subversive filmmaker possible at the time. He now heads up the Éléphant project and presented the director of the Cinémathèque québecoise with a manilla envelope full of priceless artifacts from late director Jean-Claude Lauzon. In a manner befitting everything I’ve ever known about Claude Fournier, he waxed poetic about a lost penis statue that he desperately wants to get his hands on to give to the Cinémathèque. He was also effusive with compliments towards his employer, a true patron of the arts and altruistic demi-god if he’s ever met one.

A show of hands quickly summed up that at least half the people in the crowd had never seen the movie before, which I suppose comes as kind of good news when you have such blinding admiration for your own movie that you wish you could see it for the first time all over again. This didn’t stop producers Roger Frappier and Pierre Gendron from relaying aimless anecdotes about scenes we hadn’t yet seen, talking in circles with each other and, most painfully, giving Rashomon-like accounts of the same event one after the other.

MF: Lauzon was repeatedly described as a hot-headed, difficult artist; having died in 1997, he wasn’t there to defend himself. Some of the anecdotes were funny, others just kind of trailed off before any kind of point could be established. You’d think if this event was so important, they might have prepped a little more. But maybe it can be chalked up to senility.

A full 45 minutes after the scheduled start time, the film finally began. It’s the story of Marcel (Gilles Maheu), a convict who’s released from prison still owing money to a mean mobster (Germain Houde) and a crooked cop (Lorne Brass). While trying to get out of this jam, he attempts to reconnect with his gentle, naive father Albert (Roger Lebel).

I remember at the time people saying how hard-hitting the film was. It opens with a prison rape scene that, while it was surely shocking in ’87, is borderline Disney by today’s standards. In general, the film is very dated to its era, from the neon decor to the music. It also has very strange pacing (for better or worse, nothing like either Hollywood or traditional arthouse), and I found myself wondering a number of times whether the scene I was watching was supposed  to be funny, or if changing contexts had made it unintentionally silly.

AR: One of the reasons I held off on watching this film for so long is that my teenage tastemaker of choice, Leonard Maltin, gave this a bad review at the time. Maltin claimed to be put off by the violence and the sex; although being 13 or so at the time, sex and violence were at the top of my priorities, I guess I always subconsciously dismissed it (I would later find out that I probably shouldn’t base my viewing habits entirely around the opinions of the human embodiment of the sweater vest).

Seeing the film now, I only wished it were more sexy and more violent; it’s like Lauzon wanted to bow down to his more prurient instincts and make a dirty grindhouse crime thriller but kept changing his mind throughout, infusing it with the kind of po-faced importance that wins awards and accolades. There are parts that are touching, there are parts that look great in a neon-soaked, proto-Drive kind of way, but Lauzon’s long track record of directing commercials really shows through — stilted blocking and gauzy lighting abounds. It probably reaches its apex in a sequence that should be jubilatory, where father and son ride a motorcycle through the city; unfortunately, it’s scored with anonymous Québécois butt-rock that makes it look like a beer commercial from the ’83 playoffs.

MF: Some elements of the father-son relationship were quite affecting, and the extreme ‘80s-ness of the whole thing had its moments of vintage cool. But ultimately, it seemed more like a highly original oddity than a cultural classic. Of course, it did win rave reviews at Cannes and all over the world, so maybe I was missing something. Or maybe I was just put off by the presenters’ high level of self-regard — and their weird pandering to a nationalist audience by apologizing each time they used an English expression.

AR: One thing is for certain: there hadn’t been anything quite like Un zoo la nuit in Quebec in quite some time. Mainstream cinema in the ‘80s had taken a firmly middle-brow stance and even something as tonally inconsistent as Lauzon’s film seemed like a subversive jolt of adrenaline. I think this is indicative of a bigger problem in Quebec cinema: it alternates between wanting to set itself apart from the norm and desperately wanting its product to blend in with American films. Un zoo la nuit is neither; had I seen this on VHS with one of those great, cheesy painted covers of the ‘80s that betrayed nothing of the content, I no doubt would have been bowled over by its idiosyncrasies and lurching tonal shifts. Having been prepped for close to an hour about the mind-blowing, life-changing experience I was about to embark on (one that I had been fed intermittently for 25 years, no less), I couldn’t help but be a little disappointed. ■