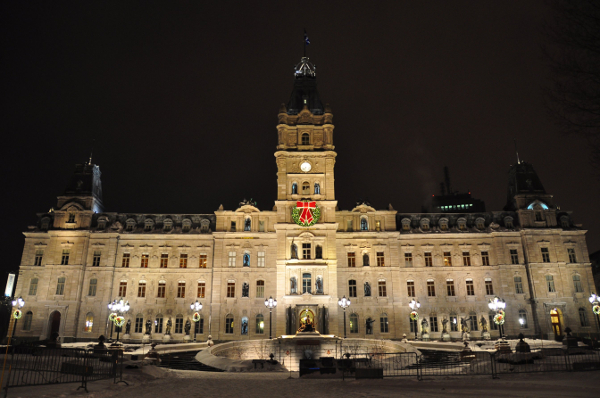 Does that Christmas wreath on the Assemblée Nationale count as a religious symbol? Photo via Flickr

For an atheist, I find myself defending religious expression far too often these days. But you don’t have to believe in a higher power to believe that others have the right to embrace whatever religious or spiritual beliefs they choose. As long as those religious practices don’t violate anyone else’s rights, then we have no right to interfere in that expression.

In Quebec, unfortunately, the Parti Québécois seems determined to turn laïcité into the state religion. According to a story by Journal de Québec political reporter Geneviève Lajoie, the PQ plans on presenting a Charter of Quebec Values this fall that will ban the wearing of items of religious significance by employees in any public institutions, including schools, hospitals and daycares. That would mean no Muslim headscarves, no Jewish kippahs, no Sikh turbans and no “conspicuous” Catholic crosses.

That the PQ wanted its plan leaked is obvious. It’s a trial balloon that allows the party to stir up heated debate and gauge public reaction to a scheme that it coyly refuses to confirm or deny. It’s also likely a form of bargaining chip: If people believe the PQ is ready to go to this extreme, it might make a watered-down version easier to sell.

The debate is also a distraction from all the other issues where the PQ has fumbled the ball, and from the government’s shrinking popularity. But there’s little chance the minority PQ will get support to pass such a bill, and, even if it does, legal challenges will keep it tied up for years.

(If Montreal doesn’t even have the right to require its employees to live in the city, what makes you think Quebec can get away with violating its employees’ freedom of religious expression?)

“Reasonable accommodation” is the catchphrase for the debate over the state’s relationship with religious and cultural minorities. But it’s rare that anything discussed under this rubric is either reasonable or accommodating.

For example, when I go to consult my physician at the Jewish General, I am not accommodating him by letting him wear his kippah. Nor am I accommodating the server at my local Tim Hortons by allowing her to serve me while wearing a hijab.

Neither of these acts require any sacrifice on my part and are no more an act of accommodation than allowing my neighbour’s son to wear his pants halfway down his ass.

What accommodation is supposed to represent is an obligation to make reasonable adaptations to rules, policies or procedures to allow for religious expression (e.g., structuring work breaks to allow a devout Muslim to pray at assigned times). Somehow, in Quebec, we’ve turned this idea on its head and defined any accommodation as unreasonable.

But shouldn’t there be a separation of church and state? I think so, but that’s not what the PQ would do. There are no plans to take down the cross in the National Assembly, change the name of the Saint-Jean holiday, ban prayers before city council meetings, or forbid Christmas decorations in the public service. Because Catholicism is part of Quebec’s heritage, the PQ has conveniently decided these symbols shouldn’t be suppressed.

As for symbols of other religions in government institutions, there’s no need to remove them — because they simply don’t exist. There’s no Star of David in the Salon Rouge, no Star and Crescent on the doors of Complexe G, no statue of Buddha on the lawn of the National Assembly.

The push for so-called secularity is clearly aimed at individuals rather than the state, and only at minority religions.

Under the PQ plan, Catholics are unaffected unless they decide to wear a “conspicuous” cross, something you usually only see on rappers, priests or Madonna. But orthodox Muslims, Jews and Sikhs are often required to wear very visible displays of their religion in the form of hijabs, kippahs and turbans.

You can’t claim equal treatment when you ban things that only affect one group. As French writer Anatole France wrote: “In its majestic equality, the law forbids rich and poor alike to sleep under bridges, beg in the streets and steal loaves of bread.”

Ostentatious displays of religion among Quebec civil servants are also hard to find. The vast majority are Catholics, few of whom wear visible crosses. And the Jews, Muslims and Sikhs who work for the government are rare — and rarely of the orthodox variety.

So the PQ is hoping to make lots of noise about solving a problem that doesn’t exist and is painting members of religious minorities as people who refuse to adhere to “Quebec values.”

If religious intolerance is a Quebec value, then count me out, too. ■

P.S.: I keep hearing the silly argument that cracking down on religion is okay because religious conflicts have often led to war. Well, so has nationalism, so shouldn’t we forbid expressions of that as well?