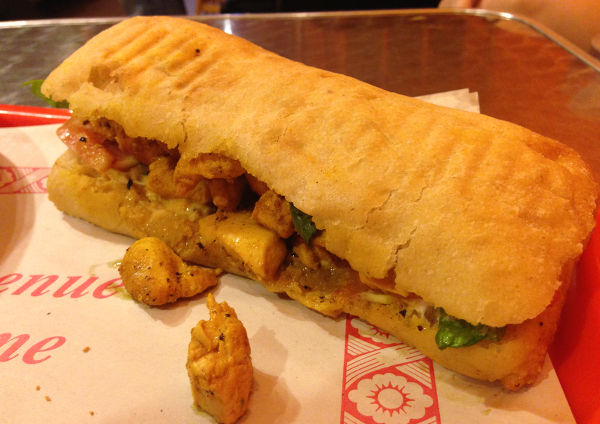 It is maddeningly, incomprehensibly difficult to get a decent sandwich in this city. Our cafés hawk uninspiring paninis, our food trucks seem unable to produce a sandwich that doesn’t count pulled pork as a selling point and our dépanneur deli counters, well, the less we say about most of them, the better. But, as any intrepid luncher knows, there is salvation hidden in unassuming corners of the city.

These sandwiches aren’t necessarily worth travelling for, but if you’re in the neighbourhood and are feeling the pangs of noontime hunger, you can do no better.

Though they’re often overshadowed by this store’s more exotic wares, the sandwiches here are revelatory. Most sandwich purveyors follow a more-is-more philosophy (see: Subway), but these are an exercise in simplicity. There are only around four choices of meat. Go for the jamón serrano. You can get your sandwich with cheese and a tomato — never has lettuce been so irrelevant. The baguette is fresh and brushed with olive oil, the quality meat is sliced paper thin, and the tomato is cut to an almost imperceptible sliver. Pay the extra $1 for the sharp Spanish cheese and gawk at the gabillion-dollar jamón ibérico de bellota while your sandwich is being prepared. (Gemma Horowitz)

One employee at Cult MTL is on an endless quest for chicken cutlet sandwiches, which are surprisingly rare here. Positano has them — veal, too. Will these blow your mind? No. Is the bread kind of disappointing? Yes. But it’s slim pickings in this area, and this is the closest you’ll get to Italian deli classics. Order your meat of choice and say yes to all the fillings. The arugula salad is pretty good, too. (GH)

Casse Dalle isn’t quite hidden — its signage advertises sandwiches and rotisserie chicken. But, save for a few good Chinese places and, of course, Kazu, Ste-Catherine W. is far from a foodie destination. A few months ago, though, out of desperation, I walked into Dalle in search of that most wonderful combination of chicken and starch. The employee behind the counter mentioned the Continental, a curried variety thereof. The sandwich was more flavourful than I’d expected, with its combination of yellow curry, mayo, lettuce and tomatoes, and it was pretty substantial, too. Would I make a trip back downtown for it specifically? No. But whenever I’m in the area, it’s my go-to. (Lucas Wisenthal)

Along with small containers of all the Lebanese mezzes and assorted salads and pita pizzas, this obscure Mile Ex eatery sells ready-made sandwiches for vegetarians (falafel) and omnivores (seasoned ground beef), topped with hummus and chopped tomato, radish, lettuce, parsley and pickled turnip. But what sets this place apart from the likes of Amir orBasha is freshness. Only a dozen of each sandwich is made daily (get there before 2 p.m. or they’re gone) and the greens are never wilted, the falafel is never tough and the bread comes straight from the conveyor belt of the attached Montreal Pita factory, which supplies many of the city’s supermarkets. (Lorraine Carpenter)

This chain specializes in thin-crust, old-country bambino pizzas, but as advertised in the window of their Parc Ex location, they also turn these pizzas into wraps, throw in your choice of Mediterranean toppings and call it a sandwich. And it’s pretty great. There are five choices of pizza: Syrian, with spicy pepper paste and cheese; Lebanese, with thyme and sesame seeds; Greek, with spinach and feta; Armenian, with ground beef and spicy sauce; and Anatolian, with a mix of cheeses (prices range from $2.29 to $3.39). There are 10 toppings: green and black olives, tomato, shredded lettuce, grated cheese, mint leaves, pickled turnips, tabbouleh and Greek salad (35 cents apiece, $1.35 for cheese). Overload at your own risk — I suggest keeping it simple, and only pairing Greek salad with Greek pizza. (LC) ■