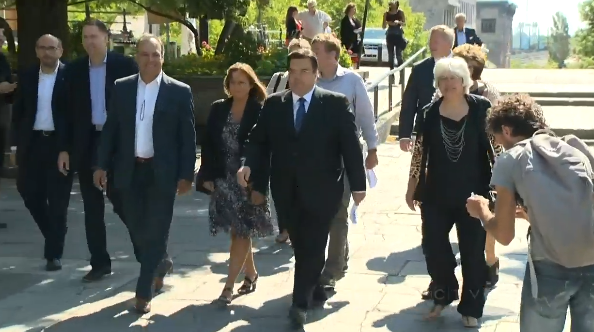 Just as Montreal, Maine and Atlantic Railway and its esteemed brass aren’t keen on paying for the clean-up in Lac-Mégantic, Canadian Pacific Railway, the operator of the tracks on which the disaster began, also says that it’s not responsible for the mess, which in July killed 47 and forced the evacuation of an entire community. World Fuel Services, a Miami company that Quebec also named culpable for the July 6 tragedy, has its, er, doubts, too, saying it has no contractual obligations with MMA.

On the municipal politics front, there’s this election happening in November, and, as you might expect, more mayoral hopefuls — namely Denis Coderre and Marcel Côté — are announcing candidates. While Côté has chosen 30-year police vet Guy Ryan to run in Montreal North, Coderre brought on some new faces, among them Rivière-des-Prairies–Pointe-aux-Trembles councillor Giovanni Rapanà and lawyer and Groupe Omega II HR person Johanne Depatie, who will run in Île Bizard–Sainte-Geneviève. Also joining Coderre today is former Union Montreal party member and current Saint-Laurent borough mayor Alan DeSousa, who said he will be “running with pride in his record.”

Coderre did not hesitate to take a shot at Mélanie Joly, the young-ish candidate who unveiled part of her own campaign platform — which includes a proposal to grant amnesty to companies that engaged in collusion so long as they pay the city back — the other day. Coderre said you “can’t improvises yourself as a politician,” and accused Joly — who he did not actually name — of being motivated by visibility alone. Anyway, the first mayoral debate happens tonight.

On another mayoral note, the prostitutes accused of extorting one-time Laval interim mayor Alexandre Duplessis will be back in court next month. Charges stemming from the scandal that took yet another municipal politician down include extortion, conspiracy and breaking and entering. But no conviction will ever make Duplessis’s timeless text messages — “Will she be dressed sexily?” “Can I wear women’s underwear?” — disappear.

Finally, while it looked like Huntingdon would become the site of Quebec’s second Muslim cemetery, that sadly does not appear to be the case anymore — but not, as one city councillor claims, because of racism. Right. ■