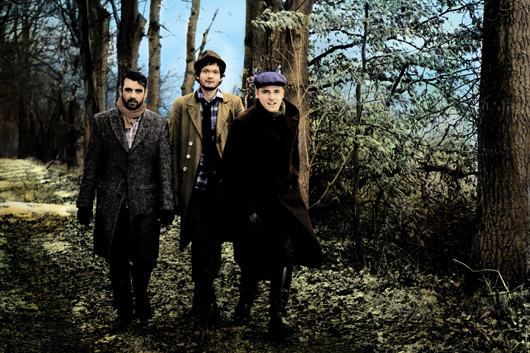 The guys in Moderat don’t like being referred to as a supergroup, although they can understand the designation. Consisting of the two members of electronic outfit Modeselektor and Sascha Ring, the cooing dreamy popster behind Apparat, Moderat (at least on their eponymous 2009 debut) felt like a trio of Berlin’s finest unexpectedly joining forces.

The results were intriguing, enough so that when they returned to their regular projects, Moderat’s influence continued to loom large. They’ve returned four years later with II, an album that Modeselektor member Sebastian Szary says is truly a band experience. “Not a bass, guitar, drums and singer,” he explains by phone from Berlin. “It was more about tracks we could reproduce live.”

II finds the GDR natives moving into decidedly more poppy territory — Ring sings on many of the songs — although don’t be alarmed by “Milk,” the sweeping, 10-minute dancefloor instrumental right in the middle of the album. Here’s a snippet of my conversation with Szary.

Erik Leijon: So between the first and second record, did Modeselektor and Apparat cross paths much?
Sebastian Szary: We ended up touring as Moderat for almost two years. By the end of the tour, we had the idea of going back to the studio, but we had already planned on doing Modeselektor work (the 2011 album Monkeytown). September 2012 was when we eventually went back in the studio as Moderat. For the first album, there was no deadline, it was very loose. This time there was a six-month deadline we set for ourselves, and it was winter work, so sometimes it was depressing. It was also perfect for making music, since there was nothing to distract us. There was no beach to go to.

EL: How did you want II to be different from the first album?
SS: We had a sound signature we set with the first album. I call it the cinematic sound, where everything is sent through reverb. We did it again sometimes, but we tried a lot of new things. We took that cinematic idea and did something new. We started with a hard drive full of unfinished eight-bar and 16-bar loops, so we each took the ones we liked and made sketches from them. Then we would make them into something that was made by the three of us, as a band.

EL: Did you want to explore more traditional verse-chorus pop songwriting?
SS: It came automatically. After four years, and especially with Sascha’s projects where he’s written a lot of songs, he got a lot of knowledge about writing songs in a classic way. In the beginning, the first idea was to make an entirely instrumental album. Sascha went through every unfinished loop we did, looking for possible vocal tracks.

EL: Has Moderat become bigger than either Modeselektor or Apparat?
SS: People use the name “supergroup” to describe us. We’re three normal people, and we put a lot of energy into it. I like it when they buy the records and come to our concerts. If it is bigger than the other ones, it’s hard for me to say. I think it’s pushing everything forward. It pushes Apparat and Modeselektor forward, too. Moderat is the next step — what we learn here we can bring to Modeselektor, which is what we did four years ago.

EL: You’re sometimes referred to specifically as a “Berlin supergroup,” too.
SS: I think the album is inspired by us living in Berlin and growing up with the music we like, especially early ’90s techno from Berlin. So maybe it’s in there, maybe it’s in our blood, the Berlin sound. So in the end, maybe it’s a Berlin album. Sascha wrote part of his album The Devil’s Walk in Mexico, but when you listen to it, it’s just Apparat. It could have been recorded anywhere. It would be an interesting experiment for us, to produce the music in a different place. I will say that we’re from Berlin, and II gives a good view on Berlin. ■