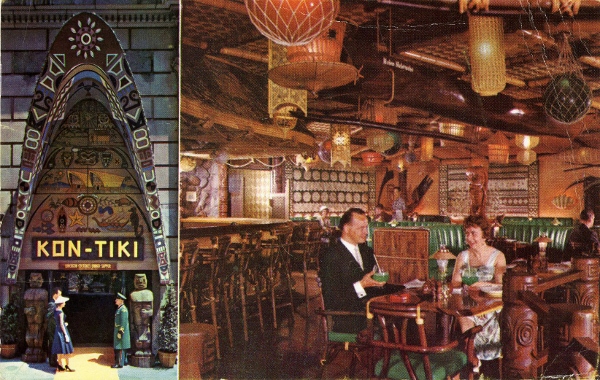 Are these your grandparents?

The mid-20th-century craze for Hawaiian kitsch, based largely on the boozy memories of WWII vets, obviously made its way to Quebec, where love for ’50s Americana is true blue.

But many of the theme establishments it produced have come and gone over the decades, and few remain—Châteauguay has the Tahiti restaurant and Trois Rivières has the Coconut Motel, but Jardin Tiki is (or was) 514’s last-standing emporium of tacky tropicalia, tiki cocktails and so-called Polynesian grub — read our review of it here.

Tiki used to be big in Montreal. There was a Sheraton hotel in what is now Cours Mont-Royal, and it was the site of the first Kon Tiki restaurant and bar, an American chain that spread to Sheratons across the U.S., all the way back to the source, in Honolulu. If your parents and/or grandparents lived in Montreal between 1958 and 1981, chances are they went to the Kon Tiki, which was spitting distance from all of the era’s cool nightclubs and bars—yes, downtown used to be the place to hang out.

Open from noon to 2 a.m., the Kon Tiki was also the site of many boozy business lunches. But unlike most Mad Men drinks of choice (Old fashioneds, gimlets and martinis), your average Mai Tai, zombie or Singapore Sling contain enough sugar and fruit to keep you productive for the rest of the day. ■

For more about tiki culture and its history in Quebec, check out Mai Tai online