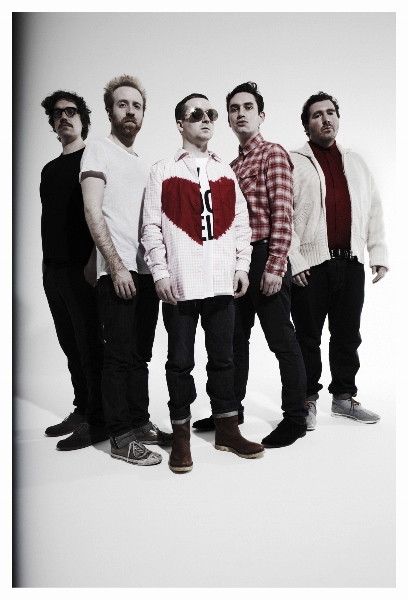 Hot Chip have carved out a reputation as a troupe of merry electro-dance musicians who are responsible for some of the most buoyant and intelligent pop music of the last decade or so. Already five albums deep, the group have also become renowned for their prowess in a live setting. Having seen them perform at this year’s Coachella festival, I can attest to their ability to get a large and diverse crowd on its feet.

The last year has seen them tour the world in support of their well-received fifth album, In Our Heads. Ahead of their headlining performance at Osheaga, I was able to reach multi-instrumentalist Al Doyle over the phone from his studio in East London for a chat about the ups and downs of summer festival season.

Michael Sallot: After doing this for awhile now, does it get difficult to maintain the energy that people expect in a festival setting?

Al Doyle: It’s hard to remember that for most people who go to a festival, it might be their one weekend that they take off in a year. They’re really stoked, and they’ll get there and will be really going for it. Then you have this bunch of completely jaded bands wandering ’round the backstage. I remember when we were first starting out, we’d get to festivals and we’d see these old bands that would have this particular 1,000-mile stare like they’d want to kill someone, and we’d say, “What’s wrong with them?” and now we’re those guys! You catch yourself doing it, but then the time you spend on stage is always really special still. For instance, this festival we just did in the U.K. is the only festival that we did here this year. You forget what it’s like to play to a home crowd and they go absolutely ape-shit! I think they got a really good performance out of us for that reason, and because we were so excited to see that in front of us.

MS: Can you share a memorable festival experience that you’ve had?

AD: Well, we’re vaguely friendly with Bernard Sumner from New Order, and we saw him the other day at a gig, and he was telling me this story about when they were at a festival and James Brown was playing. Bernard had gone to the backstage toilets and done a bad one, basically. He was a bit worried and then he saw James Brown going into the same stall. He was like, “I gotta get outta here,” because it was a fucking disaster in there. So as he was walking away, he heard him go in there, close the door and go “GOOD GAWD!” in the same way that only James Brown can say “GOOD GAWD!” Then he just ran away. When [Bernard] was telling us this story, he’s like this Northern guy, and to see him do this impression of James?! Well, I guess you kinda had to be there.

MS: If you could program your own festival, who would you get to headline it?

AD: I watched the 2000 performance of David Bowie at Glastonbury, which was really amazing. He’s not supposed to be doing any live shows for his new album, but I just remember seeing this footage of him walking on stage for the first time, and he just looks like the Prince of Earth, or like somebody who should be ruling the planet but happens to be putting on a concert because he can. I just don’t think there is somebody alive right now who has that level of presence on stage, so I’m not sure I could put anyone above him. ■

Ritchie’s mid-life crisis gangster movie is smug but not without its strengths.