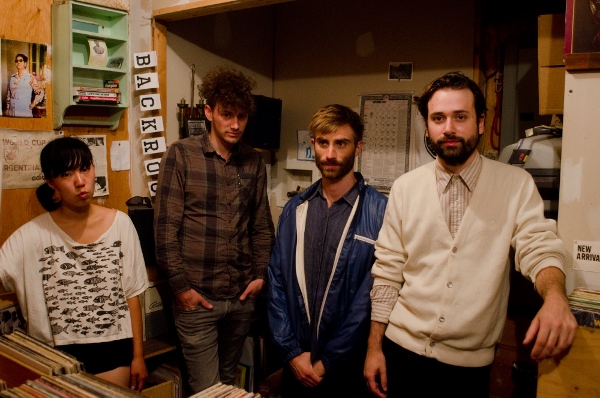 Remember Goose Hut? The trio who’d show up in matching primary-coloured costumes and kick late-night loft parties up a notch with their peppy pop songs? Or maybe you remember their sets of Taylor Swift covers, sometimes even in nearly full drag. Well, that was 2011 and 2012, and now the band is finally releasing some music officially, with the independent Indian Summer EP. Goose Hut fans will recognize the catchy singalong songs, but they may not recognize the attached band name: How Sad.

“We changed the name of our band ’cause we didn’t like the name of our band,” states singer Harris Shper. “We started out playing parties, and that’s what we thought we would do with it, so we just threw together this band and haphazardly played some shows. As soon as we started getting more into it, none of us were really happy being known as [Goose Hut]. It was born out of this joke that shouldn’t have really left a room and then turned into this thing.

“When we went on tour, I would say at least 50 per cent of the places mislabelled us as the wrong name—everyone thought we were Goose Hunt. We were also going through a little bit of

a change of pace and figuring out how we could make it more interesting than a simple party band.”

It’s less goofy than Goose Hut, but How Sad is a strange choice of moniker. Shper’s explanation made me laugh out loud. “Most of my friends are musicians and play in bands, and everyone’s in the same boat. ‘So what do you do?’ ‘I’m a musician.’ ‘Oh, how sad.’

“Everyone has to do it—we all love it, but it’s a very funny lifestyle choice, so this is a way of laughing at that. Also, the music: a lot of it is very upbeat with cheery melodies, but for some reason whenever I wrote a really happy-sounding song, it had dark lyrics. So it’s also examining the feelings that we have around what happy music sounds like. Is it really happy or what?”

Indian Summer marks another transition for the band, an expansion to a four-piece, with two new band members joining Shper and co-founder Rowan Cornell-Brown, namely Katie Lee (previously of Braids) and Nick Scribner (of Clues).

“We’re just working on new parts and reinventing the songs a little bit to make it more into a full band, and have fresh ears working on stuff. We’ve finally ditched the laptop and we’ve added more live elements to the show, different synths and guitars and more singing. It’s going well. And finally putting out a real EP! It’s exciting.” ■