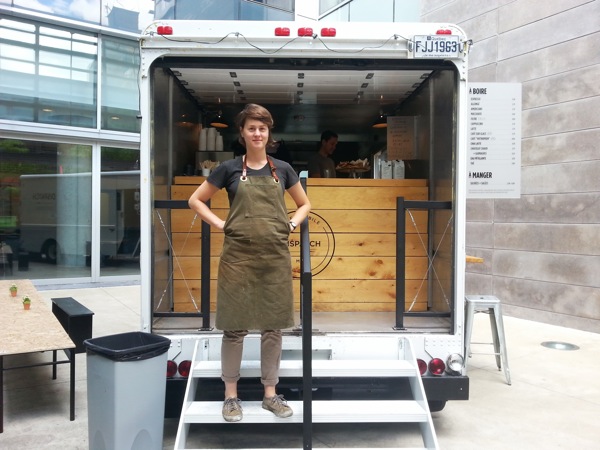 Just a block away from the Faubourg sinkhole, an elegant white food truck, Dispatch Coffee, nestles in the courtyard beside Concordia University’s FOFA gallery. The makeshift outdoor café that opens at 7 a.m. every morning attracts new regulars who are unknowingly lucky for their three-week alternative to Starbucks, Java U and Second Cup. The truck not only managed to make it to its parking space in the hours before Ste-Catherine reinvented itself as a moonscape, but also slid in through a loophole in the city’s food truck fascism.

“Chrissy Durcak’s Dispatch Coffee was not included in Montreal’s pilot for the food truck project,” FOFA’s Free/Trade project curator Katerina Lagassé explains. “Bringing her here was possible only because it is private property. Getting her into the space was a huge issue for the university, as was negotiating what it means to bring in a business as part of an art project.”

That’s right. Dispatch Coffee is part of an art project and, more specifically, FOFA’s latest exhibit, Free/Trade. The challenges that arose are a perfect illustration of the exhibition’s examination of the relationship between public space, commerce, politics, exchange and labour. However, Dispatch Coffee and the outdoor café comprise only one component of the exhibition. A second component is created each Thursday night, when the courtyard is transformed into a screening area for showcasing topical NFB films. Of these, restaurant work documentary Waitress plays continuously inside the gallery. For a third component, the FOFA’s interior space contains several installations by different artists: Brad Tinmouth, Julien Ceccaldi, Julian Garcia, Matt Goerzen, Brad Troemel and Charmant et Courtois.

The artists chosen fit or blur the line between commerce and art. The works often play with the idea of non-commercial transactions and challenging ideas of monetary value and objects that are gratis. For example, Dispatch Coffee gives out some coffee for free throughout the day. One installation piece consists of a display case of beer in a variety of different bottles brewed by Kent Monkman’s studio manager Brad Tinmouth. Lagassé explains, “He distributes the beer. If he were here, he’d give out his work.  But because he isn’t, the work has taken on a different form as a solid object.”

Co-curator Eli Kerr explains how Julien Ceccaldi’s work of hand-drawn comic book characters on second-hand t-shirts also fits in with the exhibition’s themes. “The characters are derived from his comic book series,” says Kerr. “He operates between these two realms of fine art and commercial art. When his clothes are for sale, it activates a different audience.”

Lagassé and Kerr both note that the two artists have also repurposed items for their works. Lagassé says, “Timouth has found and recycled bottles in the work. Ceccaldi uses second-hand clothing.”

The FOFA gallery is the ideal place for this kind of exhibition and the curators of the exhibit — Tina Carlisi, Joshua Fourney, Kerr and Lagassé — are acutely aware of the gallery’s location and the relationship between the university and Ste-Catherine itself.

Kerr says, “Between Peel and Atwater, this is the only thing that isn’t commercial space.”

Lagassé adds, “The storefronts along here are within the university. The university rents out its space. It’s interesting how retail manifests itself in a public institution and how this gallery still represents something else. People often come here and use the FOFA gallery as an information centre for the university or for the businesses around.”

Before the exhibition began, the windows of FOFA were papered over, just as if a store were opening. “We wanted to draw different attention to the space,” Lagassé says. “Market and social space and commerce are constantly informing each other.  We’re agents within the system. We are participating and moving around in it.”

Just watch out for that hole in the middle of the street. ■