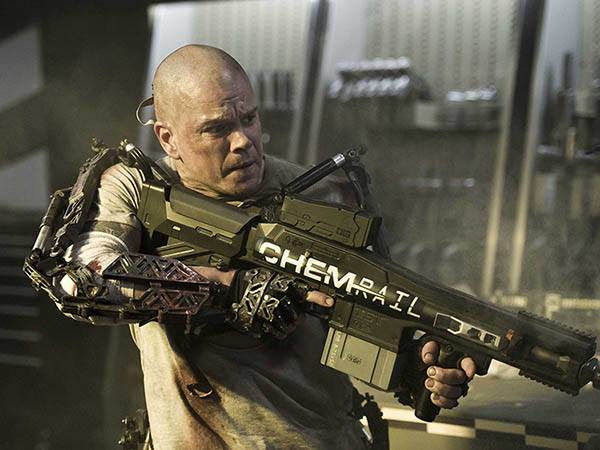 Elysium is by far the best genre movie of summer 2013. Writer/director Neill Blomkamp delivers a down and dirty ride through the slums of futuristic Los Angeles and gives Matt Damon the kind of adrenaline-fuelled smack-down only a squadron of police-bots and cyber-enhanced mercenaries can dish out.

Max (Damon) has always dreamed of joining the elite .01 per cent of humanity up on the paradise that is the Elysium space station, but has led a less than perfect life, in and out of trouble since he was a child. When an accident on the job irradiates him, leaving him only five days of life to reach the seemingly magical healing machines on Elysium, Max agrees to become an exo-suited terrorist in exchange for passage. He brain-jacks some sensitive intel from an Elysium executive, setting in motion a series of events that could not only bring down the space station but also put his planet-side loved ones at risk.

Blomkamp paints the story elements with a broad brush, providing the film with a series of easily relatable themes as a base to compose his conceptual juggling act upon. Every piece of advanced tech has got a cultural or political story hook to fall back on. The collection of sci-fi ideas is, on its surface, not terribly original but his usage of all the elements is masterful. We’ve seen personal force-fields, mind-uploads, robot cops and the like before, but never like this. It’s unfortunate that the character types and structural tropes of the film are also easily recognizable, telegraphing its ending a mile away.

Damon is powerful in his endless struggle to survive, barely able to stand without the aid of his bolted-on metal harness and sporting an electrical apparatus borked into his noggin. He’s easily one of the highlights but those seeking more of a brainless summer romp will be disappointed that his performance lends a weighty, self-serious tone to the film where another actor might’ve transported it to Verhoeven-ville with a wink. Sharlto Copley (The A-Team), on the other hand, is balls out nutso and the life of the party as killing machine Kruger —  a man on a mission to get the intel out of Max’s brain and then rip it out of his skull with his teeth.

Elysium is a technical step ahead of District 9, Blomkamp’s low-budget 2009 debut feature, but sacrifices a touch of its elegance and spark in an effort to build a bigger, better action flick. It’s arguable whether or not he was able to best his own work this summer but he’s certainly outdone his multiplex peers. ■