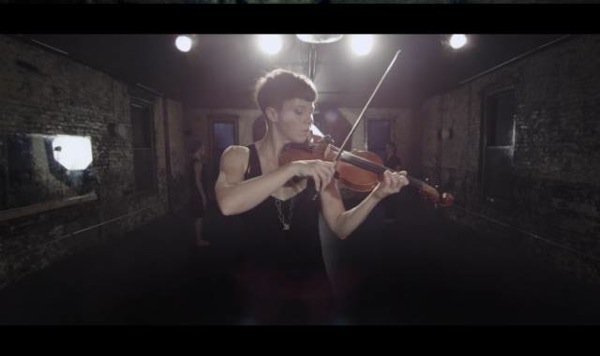 Multimedia auteur Derrick Belcham and artist/musician Ruby Kato Attwood have teamed up to found Pressur.es, a series of collaborative short films fusing dance, independent music and experimental film. Belcham and Attwood are longtime friends and collaborators who’ve experimented with art, film and music for decades, since meeting at a gifted kids pool party in small-town Ontario some 20 years ago.

Belcham’s list of collaborators reads like a who’s-who of cultural fixations — he’s made music videos and documentaries with scores of indie bands, including local luminaries the Luyas, Colin Stetson and, most recently, Sarah Neufeld, and he currently has a collaborative project in the works with James Franco. Attwood, meanwhile, is a prolific multimedia artist and core member of Yamantaka//Sonic Titan. Belcham produced an exploratory set of videos a few years ago, but now the Pressur.es team is looking for help to create a new series of original dance/music films, seeking funds via an Indiegogo campaign.

After independently creating an initial series, Belcham says he felt confident to go ahead with a second, more studio-produced series, bringing in modern ballet choreographer Emery LeCrone to collaborate. The first in the new series is the video for Neufeld’s “Forcelessness,” which debuted on the New York Times blog.

I talked to Belcham via Skype about where the concept began, with a film he created in New York with dancer Melanie Maar and shamisen player Kenta Nagai.

Emily Raine: How did you get into making dance films?
Derrick Belcham: The Pentacle dance company invited me to do an event. They thought that I would be a good person to curate a night of dance films. I thought it was a terrible idea because I didn’t know enough about the history of dance film, and I didn’t really have anything to offer in a sort of talk-back session for that. So I decided to make a series of dance films.

ER: And how did the concepts come about?
DB: I got six people on board to do these dance films and then went out and filmed them, two choreographies and four silent improvisations, just in different parts of New York. Whatever happens in the frame happens, and there’s no editing — well, there are some edits, but it’s mostly a collection of the things that happened.

I sent the silent ones off to musician pals to score. I had the screening and it went really well, and then I submitted to a couple of festivals, and that went well. And then I was just sort of sitting on them and discussing with Ruby what a series of these would look like. And then I got into production with Sarah Neufeld because she had a record coming out and her music was kind of perfect for this kind of thing, and I approached her about being the first artist in what was going to be the new series.

ER: Tell me a bit about “Spaces and Bones,” the very first film you did.
DB: It was the first time I ever noticed this three-part dynamic, that the filmmaker actually affected the dance in the way that we had filmed it. Since I didn’t know anything about the choreography that she was about to do, and it was just me with the camera with the audio strapped to my body … We showed up and met on the spot there. I set up, she set up, Kenta set up his shamisen, and then that was one take, one continuous shot.

And I don’t know, it’s like a really magical piece. Immediately after, Melanie and I talked for about four hours about what happened — why she had made a certain kind of decision at a certain point. It was like watching a game tape or something.

It was a completely spontaneous, really exciting event. From her perspective, she and I were dancing together, and she was reacting; from my perspective, I was reacting to and improv-ing these camera moves with her and trying to find the moments, and then she would react, and I would move to the next spot, while finding elements of Kenta as well. I couldn’t have asked for a better introduction to the process of making a dance film.  ■