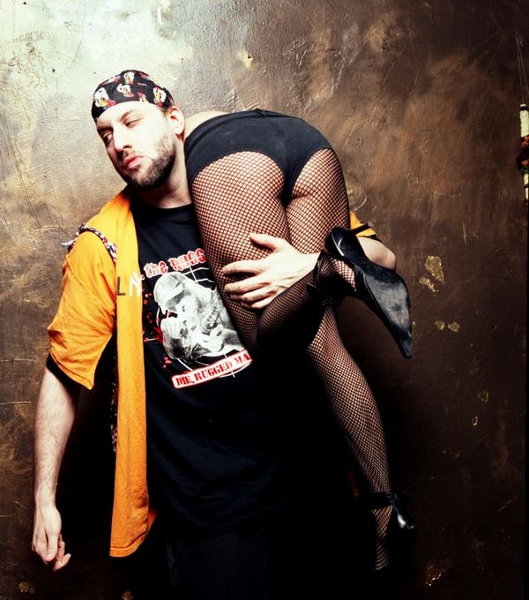 R.A. the Rugged Man and friend

New York has always prided itself in its propensity for grime and grit, embodied by the brash, violent worldview that R.A. the Rugged Man has been spouting since we first heard his guttural flow on the debut Soundbombing tape in 1997.

Rapper, screenwriter, producer, gun nut, horror buff — what’s not to love about R.A.? Ahead of his show tonight, I caught up with the man by phone. Here’s what he had to say over the din of NYC’s rush-hour traffic.

R.A. the Rugged Man: He’s from Montreal! He’s a French Canadian. He was doing all my rhymes on YouTube, and my niece or someone saw the footage and put me onto it. I was like “Oh shit, kid’s ill!” so I tweeted or Facebooked it and his mother contacted me and said Stevie would love to meet me. So I said fuck meetin’ me, he’s gonna rap with me on stage when I come through Canada.

It was big for him.

DM: I heard that you started performing really young, like 12 — is that true or just some Wikipedia bullshit?

R.A.: Yeah, I’d say even 11, but I didn’t get serious until I was 12. But I loved it, I was rapping, going from house party to house party rippin’ it and destroying MCs. I was a young gun.

DM: You weren’t a rugged “man” yet then — what did you call yourself as a kid?

DM: How did the loss of your father (in 2010) affect you both as a person and with regard to your creative output?

R.A.: You hear a lot of the loss on the new record, Legends Never Die. But of course any time you take a big hit in life, there’s gonna be an advancement in your mind and your strength. That’s what loss does — it makes you a bigger, stronger person.

DM: So there was Die, Rugged Man, Die and now there’s Legends Never Die. What’s happened between them, with regard to the parallel themes of death?

DM: When I saw you last September, I felt like I was seeing a guy more in control. There was a certain maturity to the set. Did you work on that, or did life level you out?

R.A.: Life experience kind of…I think life kinda mellows everybody out. Unless you die. If you’re rowdy and murder-the-world your whole life, you’re gonna die fast. I was definitely on a leave-the-Earth-early type of path early in my career. But I still got that kinda wild, slap-ya-in-the-face shit goin’ on. I just might not be as much outta control as I was.

DM: Having watched you go since the Rawkus days, my impression is that you still pick up new fans that look at you as a new artist, which is an uncommon type of longevity in hip hop. Am I being generous? By the same token, some cats might say like “Come on, an album every 10 years…”

R.A.: People who say that don’t know what the fuck they’re talking about. I’ve put out four, five albums. Just because a corporation doesn’t put the album out correctly doesn’t mean I didn’t do the work. All these albums that I have, and people say that — there’s politics in the game, rules that I broke. So to those people: Fuck you. Suck my dick. Whoever says that is a fucking idiot. Those motherfuckers, what it is is that they know that I’m a superior MC. There’s nothing else to hate on me with. “He didn’t put out enough records corporately.” I have more songs out there than 90 per cent of rappers, and more longevity.

DM: What was your first Stanley Kubrick film you watched as a kid, do you remember?

R.A.: I went to see a horror movie, I was a little boy, and they showed the trailer to The Shining. I remember the blood coming out the elevator and the music, and I was like, “What the fuck is that movie? That shit looks scary!” So that’s my first memory of Kubrick. But I didn’t know anything about who he was or what it was, just that I was a little kid and blood coming out of the elevator was fuckin’ scary! ■