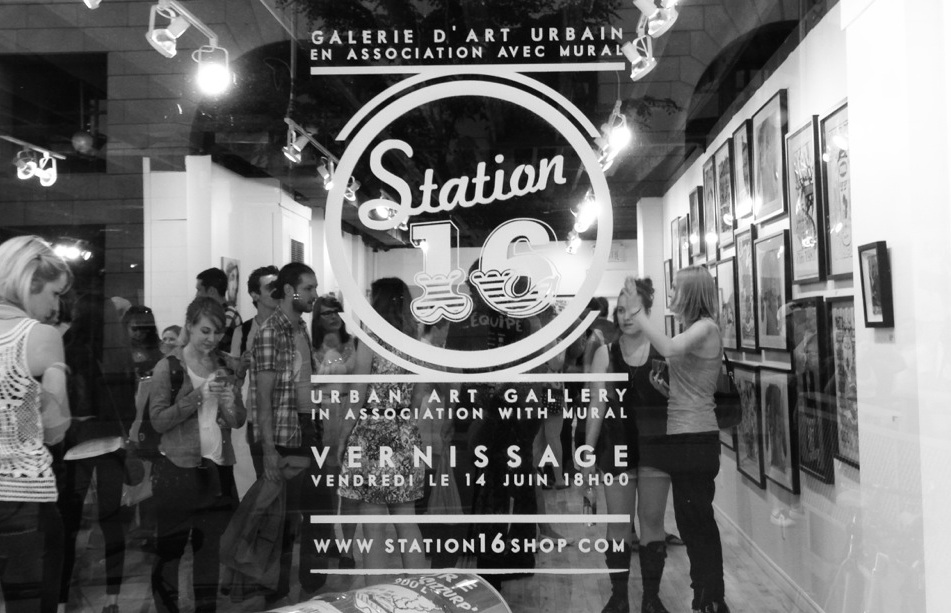 Moving season is over, but at the new Station 16 gallery on St-Laurent, there’s always something to unpack. Near the door, a freshly painted black wall awaits its next tenant. Prints peek out expectantly from boxes that line the back wall. And canvases lie against the walls as if to creep up on their own. There’s work to be done at Station 16. And Adam Vieira, one of the paint-splattered pair of hands behind the local silk screening company, wouldn’t have it any other way.

“I would love for this place to be changing all the time — be the space people come by just to see what’s new in the Montreal art scene,” Vieira says as he sorts through prints with local pop artist Antoine Tavaglione, aka TAVA, whose newest body of work will be exhibited at the gallery’s official housewarming party this Friday.

After all, it’s a good housewarming that makes a house a home, and Station 16 is ready to celebrate, summer-style. On the party itinerary: BBQ by guest chefs Selma EM and Étienne Garceau; beer, wine and a special iced drink by Barefoot Wine; electro and hip-hop beats by DJs Malky and Munno, courtesy of the Saint Woods people; and lots and lots of affordable art for sale. And like the best parties, it’s being thrown by a friend.

“Just like all the other Montrealers who have moved around on July 1 and are still unpacking their boxes, we thought Station 16 deserved a housewarming party, too,” says Philippe Demers of MASSIVart, the art promotion agency behind the yearly mega-expo Chromatic, who is hosting the party along with Saint Woods.

“We’ve been following Station 16 for a few years now, and we’re really impressed with how they promote and market art in the city,” says Demers, who coordinated a series of Chromatic prints with Station 16. “Their success with artists and with the public shows you how needed they are in the city. So it’s time to celebrate that.”

Since adding limited-edition silkscreens by Montreal artists to its decade-long apparel-printing business for brands like Crooks & Castles and le Chateau, Station 16 has become a major player in Montreal’s arts scene.

Now that it’s moved into an open-concept office and gallery space with LNDMRK, the creative agency behind this year’s inaugural MURAL public art festival, and Saint Woods, of SuWu bar fame, Station 16 is a little closer to the action than its Mile End printing factory. It’s also become roommates with some of the heavy hitters in Montreal’s art and entertainment scenes.

“This space really creates an artistic vibration for everyone in the neighbourhood. During the MURAL festival, even if we were here working until the early hours of the morning, we would have people looking through the windows looking in, curious,” says André Bathalon of LNDMRK. “And the Station 16 office is really a continuation of what LNDMRK did through MURAL. It continues that artistic invasion of the street and brings it into the gallery. It’s like a bridge between the two worlds.”

Artists who put their trust in Station 16’s creative vision and business model seem to agree with Bathalon — it’s kind of a superpower. Not only does the company allow artists to experiment with new ideas and techniques in a special section of their print shop, it also prints the works with no investment on the artist’s part, splitting the profits from sales halfway. And so far, it’s an approach that’s working.

“We’ve been collaborating for the past couple of years, and it’s been great,” says Tavaglione, who will present 12 new silkscreens and a new selection of canvases at Friday’s celebration. “Station 16 really believes in what I have to offer as an artist, and I’ve gained lots of visibility through them. We’ve grown together, and I think there’s lots of space to keep going. It’s just the beginning.” ■