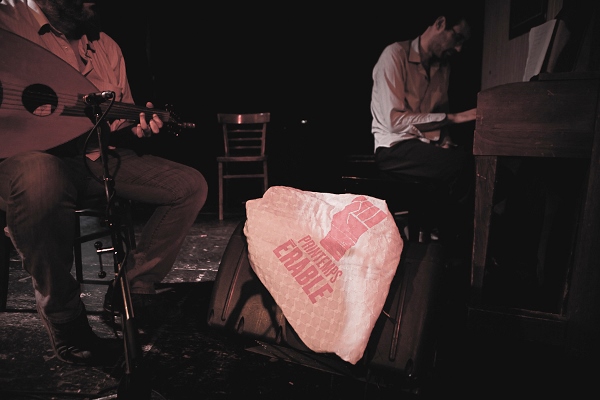 Rodina is a series of piano and oud duets between Stefan Christoff and Sam Shalabi that draw on free-form jazz and the makam tradition of Arabic music. (Listen to the record’s opening track here.) Though the title refers to a Slavic concept of motherland, it’s not about a particular territory but about the broader concept of what makes a homeland.

Back in 2010, Shalabi — a prolific Montreal musician known for his psychedelic ensembles Shalabi Effect and Land of Kush, as well as his solo work (including Osama, a reflection on post-911 islamophobia) — decided to move to Cairo.  While he was planning this move, the revolution happened.

Recorded last fall during one of Shalabi’s visits to Montreal, Rodina’s open-format music stems from open-ended political discussions between Shalabi and Christoff (a well-known local activist and member of the Howl! Arts collective).

The three of us sat down at Euro Café on St-Laurent last week to discuss the new record, living transnationally and the endless search for a homeland.  A lengthy conversation ensued, and carried on into the street.

Joseph Sannicandro: Rodina is rooted in this idea of an endless search for a homeland.  How did this come to be important to you both, and how does it relate to the music you play together?

Stefan Christoff: There’s a recognition that that search for home is endless in North America.  There’s no obvious conclusion and I think that has something to do with this land as a colonized land, and the realities we live in today as cultures that are scattered globally. The original injustice of the displacement of the first people has not been resolved, right? That idea of calling this project Rodina, and the melancholy of it, is feeling and breathing and living that, and recognizing the other influences of the cultures from which we came.

Sam Shalabi: That melancholia that Stefan is talking about is buried in a lot of people. It’s not that you have to be nationalistic or proud of your borders or something but that sense of belonging somewhere requires a certain amount of privilege — you’re able to create that sense of rootless cosmopolitanism, but I suspect that most people can’t ever really feel at home anywhere. We know what we do is not traditional music but the appreciation of it is creating another kind of imaginary homeland I guess.

JS: What are your thoughts about the recent events in Egypt?

SS: The idea of the coup is insignificant. The army in Egypt has had power in Egypt for 60 years. They own 40 per cent of the economy, they have a lot of industries — they don’t need executive power, they ARE the power in Egypt. I think the argument about respecting democracy is a fucking joke anyway. Wherever you look, there’s no democracy, so that part of it — people saying that the Brotherhood’s mandate isn’t through — I totally respect that.  Then you ask, How else should that have happened? I dunno. The military stepped in, they have some special bond with the Egyptian people. [laughs] Everything that happened from that moment is now suspicious and really needs to be looked into.  I don’t think it’s hopeless, but it’s a mess.

JS: And what can we learn from these experiences?

SC: Montreal is facing a big question, as artists, as a city, the cultural sphere — do we retain an artistic presence that is rooted in life and politics and rooted in having real discussions about life and the world? Do we have a more gentrified version of art that strips away art’s relationship to the world and look at art as a commodity?  It’s going to become more and more urgent.

JS: Do you feel at home in Egypt?

SS: More than here, that’s for sure. I didn’t go there to do something, for the music scene or anything, it’s the city and the culture itself that I’m there for. In Cairo, people are more alert, more willing to cut to the bone. In Egypt, the air you breathe is political. I don’t even talk about politics with musicians (here) anymore.  When I lived here, people would ask me, “Why are you interested in this?” “Oh Mr. Artist is interested in politics.” But to me, this is your life, actually. You don’t realize that for most of the world, this luxury of being able to separate these things doesn’t exist, and you know it shouldn’t just because we’re living—

SC: —in a colonial dream world?

JS: Maybe if we have some serious food shortages here people will wake up.

SS: That’s what it is. People look at third world countries and think there’s something backwards about them, whereas I find that here in North America there’s something more backwards. People here still think they’re represented by the people that are elected and empowered, and they don’t see that it’s in their hands. In Egypt, they have no choice —these guys who are in power, no one believes what they say.

JS: Would you consider what you do protest music?

SS: The thing that I’m not interested in is propaganda, doing political music that is either preaching to the converted or telling someone what they should or shouldn’t think. That cheapens the power of music.

Just because someone chooses to do something banal — singing about cars, or hot dogs — that’s still political. There’s a reason why that person is choosing to do that. If you take what it can do seriously, you know it actually can affect people in a way that goes beyond this idea of what’s political, casting your vote or carrying a sign on the street, which in a way is a self-defeating idea of what is political anyway.

When you have musicians that are playing together, that are creating something together, especially improvising together, that’s what you’re doing: you’re trying to create something together, showing that that’s possible, another way of interacting. Evan Parker, the great British saxophone player, said politicians could learn a lot from the way improvising musicians work together. I think it’s absolutely true. It shows another way or organizing communication, another way of how people might treat each other that’s not based on power relations. Implicit in music is a huge power, the best kind of power because it’s endless, it doesn’t stop anywhere, and it’s not yours. It’s available to anyone who wants to do it or hear it. ■