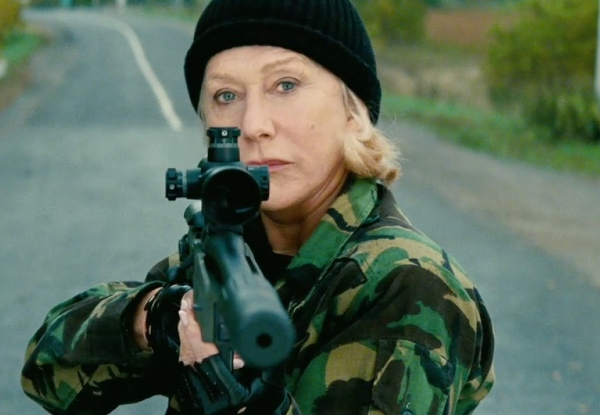 Red 2 opens up in a suburban Costco. Sarah (Mary-Louise Parker) is bored with her boyfriend, Frank (Bruce Willis), who introduced her to a life of high-stakes espionage in Red 1. Frank is far too excited about backyard barbecues for her taste. So when his old CIA buddy Marvin (John Malkovich) shows up and asks him to go on a mission, she’s all for it.

What unfolds is a whirlwind adventure through a host of cinematic locales: Tokyo, London, Moscow, Paris… New Jersey. The film is adapted from a Warren Ellis and Cully Hamner’s recent DC Comics series.

Frank, Sarah and Marvin set out to track down a powerful bomb. Created by Bailey (Anthony Hopkins), a crazed genius with prodigious weapon-making talents, the bomb has, as Frank says, the “capability to change the balance of international power.”

The three face off against colourful, cartoonish adversaries. Katja (Catherine Zeta-Jones) threatens to break up Frank and Sarah’s domestic disharmony and give the bomb to her employer, the Russians. Victoria (Helen Mirren) is a talented former M16 officer and a hell of a shot. And Han Cho-Bae (Lee Byung-hun) is a Korean hit man who despises Frank and has the ability to stab someone to death with origami to boot.

There’s a lot to like about the film. There’s a spectacular car chase through Paris. The fight scenes — which invariably include thousands of rounds being fired off — are entertaining. And the film’s dark humour generally plays well, especially in the hands of Mirren. Some of the loudest laughs come when Victoria casually dissolves a corpse in a bathtub while chatting on her cell.

The film, though, is forgettable and certainly doesn’t live up to the first iteration. The budget and locations have been enhanced. But the relationship between Frank and Sarah, which is central to both films, is stale. We’re supposed to hope that this adventure brings them closer together. I didn’t. ■