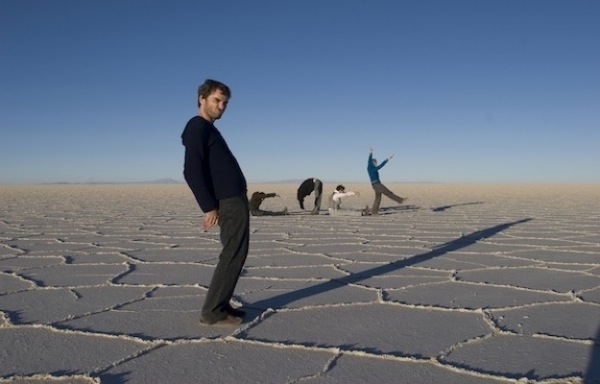 Jon Bennett in Pretending Things Are a Cock.

Laughter is a many splendoured thing. From low- to high-end and every fart joke in between, Montreal’s got the kings and queens of comedy pounding the deck this week and throughout the month.

Shall we start with comedy, 16th-century style? Repercussion Theatre’s Shakespeare-in-the-Park  is hitting a green space near you. They’ve been bringing the Bard to parks around the city for 25 years, and this summer the company returns to its debut show by making merry light of love with A Midsummer Night’s Dream. There’s no better piece for outdoor theatre than these three interlocking stories that take place in a fairy-haunted woodland, prodding along by bad-ass imp Puck and a makeshift acting troupe composed of “rude mechanicals.” July 11, a special show atop Mount Royal features pre-performance musical productions by Shakespeare-in-the-Park alumni Nick Carpenter, Mike Hopkins, Jennifer Morehouse and Emily Skahan, with an after-party at Thompson House (3650 McTavish).

Zoofest also brings the best recent festival hits back to the stage. What have we got? Cameryn Moore’s autobiographical coming-out story for the kinky, slut (r)evolution (see our recent interview with Moore here); recent Moth winner Jon Bennett has a certain topic in mind with Pretending Things Are A Cock; Gerard Harris declares 5000 sq. ft. of sovereignty in Let’s Start a Country (read our chat with Harris about the piece); then there’s a “neo-burlesque Orwellian parody” with Bad Ladies and the Detective; and to top it all off, a musical about U2 – All I Want Is U2.

Quietly reviving itself from a deserved post-Fringe nap, Mainline Theatre presents Insanely Sinister Society (July 10–13), in which two detectives, Mr. Moarcock and Mr. Morgenstern, do battle with the League of Evil Geniuses of Crime.

The clowns, acrobats and juggling feats of the Montreal Complètement Cirque fest aren’t complètement done either. Perhaps thanks to Cirque du Soleil, Montreal is a city that excels at adding artistry to big-top jaw-droppers. A freebie street performance of 40 acrobats takes place nightly at 6:30 and 9:30 along St-Denis, starting at Rue Emery. Also free is the trapeze mayhem of Babel found at Place Emilie Gamelin from 9–10 p.m. (to July 13).

Finally, if you feel like you’ve had enough of Montreal festivals for the moment, take a road trip out of town to catch a Sherlock Holmes parody of The Hound of the Baskervilles on the shores of Lac Brome. Watson and Holmes solve the mystery of Sir Charles Baskerville’s death on a stripped down stage with amped-up wit. Steamy! ■