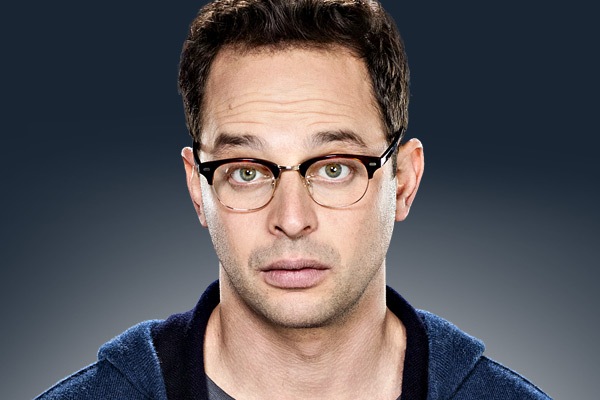 Nick Kroll on why Canada is funny

Nick Kroll thinks Canada is funny. That he makes clear in “Wheels Ontario,” one of the best skits on his Comedy Central/Comedy Network show, Kroll Show, whose second season will begin next year.

“Wheels,” which makes fun of the regional peculiarities of the Great White North and the show Degrassi in equal parts, is representative of Kroll’s off-kilter humour. It has all the gravitas of a teen show about “issues” accompanied by exaggerated Canadianisms in every line. Like many of his sketches, it gets better on repeat viewings.

Kroll, 35, is a masterful parodier of reality TV, and his most brilliant characters, delivered in his signature drowsy monotone, are all spot-on reality stars. (For a sample, check out the insincere publicists Liz & Liz.)

In anticipation of his Just for Laughs solo show this Friday, I asked Kroll the all-important question of why Canada is so irresistible to comedians and learned of a surprise Québécois guest on the next season of his show.

Gemma Horowitz: Have you been to Canada before?
Nick Kroll: I have been to Canada a number of times. I’ve been there twice for the Montreal festival (Just for Laughs), and then I came when I was driving throughout the country and we popped into Canada twice. And then, when I was in middle school, I came up for a camp trip and we went to Montreal and went to a peep show.

GH: “Wheels Ontario” makes fun of Canada. What about Canada is so funny?
NK: You know, it’s a combination of things. One, I think, specifically with “Wheels” is, there’s the specifics of Degrassi, which our editor watched religiously. So when we handed him that sketch, he was incredibly excited.

And also what I partly think is how familiar Canada is with the U.S., and how unfamiliar the States is with Canada. Like, how unbelievably aware you guys are and how little we know about you. Which is sort of inherently funny to me.

And then it just becomes a fun game of specifics. Especially with Degrassi, the even temperament that we assume is part of Canada mixed with the incredibly high-stakes elements of Degrassi, its lessons and its issues that it tackles, whether it’s abortion or rape or drug abuse or domestic violence. But it’s all done with sort of that even keel of the Canadian temperament.

GH: You’re from Rye [very wealthy suburb of New York City], right? I’m actually from White Plains [less wealthy suburb of New York City]. I recognized the douchebaggery of a lot of your characters, like Bobby Bottleservice and the Ed Hardy Boys. Were they inspired by the area?
NK: I would say “Ed Hardy Boys” is more White Plains and “Rich Dicks” is more Rye.

GH: That’s pretty accurate.
NK: Where I grew up and where I went to college and all that stuff, I met a lot of rich dicks over the years. I think growing up where I did, and also being around dudes like Bobby Bottleservice in my town and surrounding towns, and then being able to go into the city and seeing guys like George and Gil from “Oh, Hello” and seeing Fabrice downtown on, like, Christopher Street. You can really gather that information wherever you are.

GH: You do touch on a lot of different levels of douchiness. Which is closest to your own?
LC: Hopefully there are elements of my douchiness in all of my characters. That’s the hope.

GH: Your humour is a little bit off-beat, a bit weird. Who are some comedians who have influenced you?
NK: I watched, like a lot of people around my age, a lot of Kids in the Hall. And one of the best compliments I’ve gotten was from Evan Goldberg and Seth Rogen, who are Canadian and saw the show and very nicely said something to the extent of “watching your show felt like watching Kids in the Hall when we were growing up.” And I don’t think they were making a direct comparison, but I was really kind of psyched that that sort of thing came through. And I watched a lot of Mel Brooks movies.

GH: Will you reprise “Wheels Ontario” in the next season of your show?
NK: Oh, yeah. “Wheels” has a big big place in Season 2. A lot of “Wheels.”

GH: Any chance of Drake making a cameo?
NK: It might have been tough to get Drake. But you get Lauren Collins, who was on Degrassi: The Next Generation and is awesome on the show. And she was on the show with Drake. I can’t remember the name of the character. Hold on. Let me ask my editor. [He asks his editor] Paige Michalchuk.

GH: So it’s basically like having Drake.
NK: Drake by proxy.

GH: Are you going to go to another peep show when you’re in Montreal for Just for Laughs?
NK: I don’t think I will. But anything can happen in Montreal.

Nick Kroll performs as part of Just for Laughs at l’Astral (305 Ste-Catherine W.) on Friday, July 26, 11:30 p.m. (the show is sold out). The second season of Kroll Show is coming soon to Comedy Central/Comedy Network.