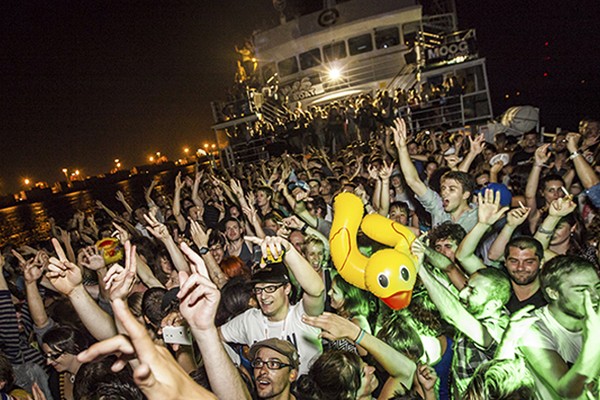 The MEG boat in action

In its 15th year, the MEG (Montreal Electronique Groove) festival’s focus remains consistent: promoting local artists who work in the many realms of electronic music, and perform it live.

MEG’s three streams of programming (electronic, pop rock and hip hop), on display during their annual festival, along with its monthly Club MEG showcases at Divan Orange and touring showcases, set it far apart from what you might expect from a techno festival.

“In my vision [for the festival], i try to follow the creation of the artist. I’m not interested in trends, but our focus on live performance was helped along since 2003, 2004, with the electro-punk, electro-pop movement — everyone started incorporating machines into their creation.”

Local synth-punk band Duchess Says exemplify that mecha-punk upswing perfectly, having become renowned for their intense shows over the past decade— they’re on our Best of MTL Freakiest Local Band list for a reason. among the local artists joining them in the festival’s pop-rock pool this year are Complications (snarling punk-pop, featuring former members of Born Dead Icons), Country (a late-night acid house revivalist duo feat. Beaver Sheppard), CTZNSHP (a post-punk-ish power trio) and le Couleur (a sleek electro-pop band), as well as French chanteuse Mesparrow.

On the hip hop front, MEG has booked local staples like Alaclair Ensemble, Dead Obies, Malik Shaheed and Artbeat Montreal‘s piu piu crew, up-and-coming 514 rappers Green Hypnotic and Frenchi Blanco, as well as L.A.’s Shlohmo, a 22-year-old producer who emerged with the Wedidit collective, remixed a pile of prominent artists and created tracks with vocalists like How to Dress Well. Local DJ/producer Tommy Kruise plays on Shlohmo’s bill — see our interview with him in our current newspaper, available here now.

The acoustic-to-digital ratio tips toward the latter, of course, with electronic highlights including tomorrow’s festival-opening Techno Parade (a French co-production — MEG will appear at the equivalent event in Paris in September, with 40 local artists in tow), locals Locomote (minimal dance music), Grrreat recordings founder Van Did (dancefloor techno) and German DJ/producer Zombie Nation, a guy who was discovered by electroclash granddaddy DJ Hell back in 1999, and went on to launch the record labels Dekathlon and UKW — his local connection is Tiga and Thomas Von Party’s label Turbo Recordings, which released his latest record, RGB, last year.

The latter plays on the MEG boat, a party boat that has packed in DJs and dancers for five years now, ever since MEG was Osheaga’s electronic-programming wing (Piknic Électronik has taken on that role now). This year’s MEG boat headliner is Parisian electro producer extraordinaire the Hacker.

“It’s a beautiful experience for people to see Montreal [by sea] at 2 o’clock in the morning,” says Terki. “With the Hacker and Zombie Nation, this is going to be crazy.” ■

The MEG festival runs at various venues from July 25–Aug. 3. Check their website for program, schedule and ticket info.