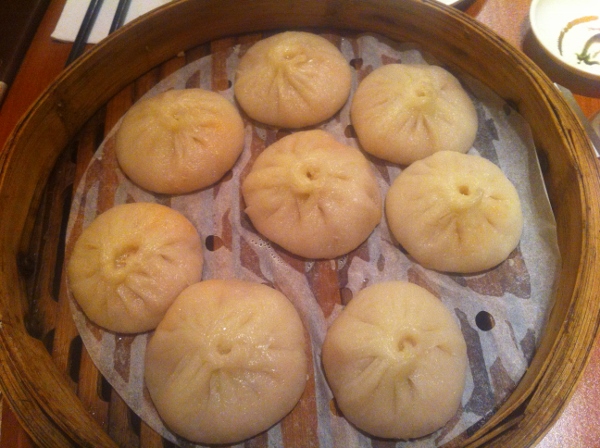 Soup dumplings aren’t crescent shaped. They don’t come fried or boiled. And they don’t come in soup. These dumplings, which originated in Shanghai and are called xiaolongbao, are usually filled with pork or seafood. The soup part of the equation comes from meat aspic, which is mixed in with the stuffing and then melted into a fatty, succulent broth during the steaming process. You have to eat them tentatively, careful not to waste the both or — worse — be seared with the hot liquid.

When you see a photo on a menu that features small steamed buns with a pinched top, you’ll know you have hit the jackpot. Noodle Factory in Chinatown has an okay version. The dumplings at Qing Hua get close, but they’re not xiaolongbao. The restaurant Mei (1425 Mackay), however, features the real deal.

Mei opened a few months ago in a space that used to house a bubble tea joint. It’s a small, comfortable place with a bit of a tea-parlour vibe. An unseasonal fake fire blazes near the entrance and in the back is an odd section of tables with faux-ivy-covered swinging benches. The managers also have an unfortunate penchant for elevator music (a muzak rendition of “Auld Lang Syne” played at one point). But the atmosphere is beside the point.

Mei has an intriguing pan-regional menu of Chinese small plates. It’s part of a new breed of Chinatown 2 restaurant, and is similar to – but better than – the snack-food-centric Fortune Dumpling on Ste-Catherine. Its menu features unusual (in Montreal, at least) items like Chinese calzones, 70-cent steamed breads with meat and veggie fillings, crêpes, noodles and, yes, a substantial selection of dumplings, including xiaolongbao.

The dumplings are made from scratch on a glass-enclosed counter visible to customers. We stuck to soup dumplings, though the other dumpling options looked promising, and ordered the pork, pork-shrimp, pork-caviar and one that promised leek, egg and shrimp, but seemed to be missing the shrimp. They came in bamboo steamers, plump, quivering and tenuous with ready-to-burst juice. More fragile than others I’ve tried, they made for difficult eating, but were well worth it. The plain pork and the pork-shrimp were the universal favourites at our table.

Vegetable dishes are few and far between at Mei, so we ordered one of the only ones, a three-choice veggie appetizer plate that we got with a dish of fungus, onions and coriander; a cabbage salad; and a seaweed salad. The cabbage and seaweed were unremarkable, but the mushroom dish was a refreshing foil to our starchy meal.

Though the soup dumplings received the most rapturous praise at our table, a beef noodle dish came in close second. We agonized over whether to order the beef noodles or the “nouilles maison” but felt at peace with our decision upon the arrival of a cold-noodle dish topped with slices of soy-marinated egg, cucumber slivers and soy-braised beef. It was served in a Sichuan-peppercorn-laced sauce that had the usual numbing, tingly and insanely addictive effects.

The snacky portion of our meal was less impressive. The “calzones” looked more like an empanada than the pizzeria stalwart, and tasted like pan-fried dumplings. The vermicelli, dried shrimp and leek packages were
pleasantly greasy and filling but didn’t reach the flavourful heights of the noodles or soup dumplings.

The item labelled “crêpe croustillante Chinois” is a Beijing street-food favourite called “jianbing,” a fried, eggy pancake with a thin fritter tucked inside. Though it had a nice, alternately soft and crunchy texture, the combination of flavours just wasn’t doing it. Our table much preferred the other crêpe dish we ordered, a rolled-up pancake stuffed with beef (the “crêpe au boeuf” on the menu).

We gave in to the call of the soup dumplings and ordered one more celebratory round. But there’s more to explore at Mei (I’ll be back to try the interesting-looking tofu soup, the steamed breads and other noodle dishes). It’s an exciting addition to the ever-expanding roster of Chinese restaurants downtown, and offers the kind of satisfying cheap eats I wish we could get from our still-not-quite-there food trucks. ■

Mei
1425 Mackay, (514) 288-1314
Booze: No (but there’s a big milk tea and juice list)
Vegetarian-friendly: No (unless you make exceptions for meat-based broths and seafood)
Wheelchair accessible: No