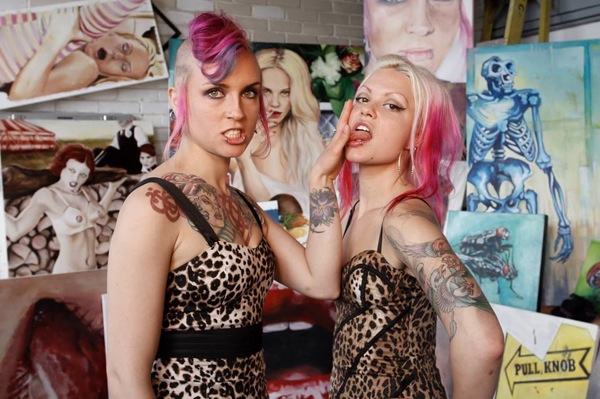 Layla Folkmann and Lacey Jane of Hot Sluts and Poutine. Photo by Dannygirl.

Emily Raine: How did you guys start working together?
Lacey Jane: We originally met in art school — we went to MacEwan University from 2007 to 2009. Friendship started there, and after that we ended up travelling for about two years combined to Southeast Asia and Central America, backpacking. We did all of our bonding on the road.

ER: What’s the appeal of raunchy imagery for you?
LJ:It’s hard to say. Both of us stem from the idea that sexuality is very empowering and also very interesting. It’s an imagery and idea that I’m very drawn to. Plus I always liked art that’s a little more in-your-face and grabbing, whether that be positive or negative or just a little bit more shocking.

Layla Folkmann: For me as well. I feel like sexual imagery is something that I’ve always gravitated toward, not really sure where that started from. But as far as art goes, I’ve always found sexual subjects quite fascinating. It’s kind of our brainchild, because what’s in our heads is what’s on the canvas.

ER: So why the name Hot Sluts and Poutine?
LJ:I guess we were inspired once we arrived in Montreal, about a year and a half ago. It’s the product of Quebec for us, a little bit of hot sluts and a little bit of poutine. We felt that it would suit the city fine. And it kind of represents us: it’s funny, it’s sexual. We’re very light-hearted in everything we do, and that comes across both in our artwork and our representations of ourselves.

We thought it might be good marketing, in retrospect, as well. As far as marketing for men goes? Like, food and hot sluts? That grabs a lot of people. Although we have very little to do with poutine.