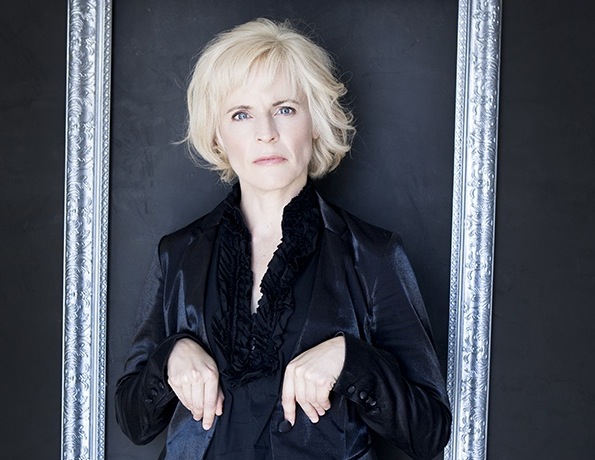 “Schizophrenia is hearing voices, not doing voices!” The joke is a staple bit in comedienne and voice actor Maria Bamford’s sets, part of a rant regarding stereotypes about mental health issues.

Bamford’s comedy draws equally on her elastic vocal impressions and self-deprecating narration of the thought processes behind emotional dysfunction. She recounts her anxieties in surrealist vignettes, mimicking the well-meaning advice from people in her life and milking her own struggles with bipolar disorder, depression and obsessive compulsive disorder for all of the angst-y comedy she can. She even named her 2009 Comedy Central special after her OCD diagnosis, Unwanted Thoughts Syndrome.

“That could be how one is perceived,” she deadpans, feigning shocked laughter when I ask her about the appeal of playing up the crazy. “I always think of myself as a strong, tough, even-keeled survivor, very reasonable. And apparently that is NOT how I come off. It’s disturbing.

“I’ll have to start writing more letters or something, so that people get what I’m trying to put out there.”

It’s hardly news that there’s a link between funny people and mental health problems—hell, the average comedy club contains more emotional disorders than the DSM-IV—and while Bamford’s issues are very real, they are honed and embellished for the stage.

She may own the hammy loser schtick, but the alt-comedy legend’s career couldn’t be going better. She voices several animated characters for Cartoon Network, PBS, Adult Swim and Nickelodeon, and she was part of the original The Comedians of Comedy juggernaut tour with Patton Oswalt and Zach Galifianakis. The AV Club ranked her last record among the top 10 comedy albums of the ‘00s, and her latest Comedy Central special comes out this month and is already accumulating blogosphere buzz.

Finally, in what is undeniably a coup for any comic, Bamford was added to the ensemble cast of the hotly anticipated Netflix Arrested Development re-boot this spring.

“They wrote it for me, as far as I know. That’s what the producer said, anyhow,” she says about her character DeBrie Bardeaux, a recovering addict and one-time low-budget Fantastic Four rip-off actress who takes up with Tobias Fünke (David Cross) in the fourth season. “That was really nice and surprising. I’m so glad to have been a part of it.”

It’s a role she followed up with a guest appearance as a romantic interest for Louis CK on his vehicle Louis, although she admits that the shift toward character acting makes her a little nervous.

The 20-episode 2009 web series The Maria Bamford Show opens with her moving back in with her parents in Duluth, Minn. after a fictional nervous breakdown, with Bamford playing herself, her family members and various other acquaintances. It’s a gambit she uses a lot, doing pitch-perfect impressions of her mother, in particular, as well as her physician-turned-shaman/life coach sister. She’s also more recently released a series of darkly funny short videos called Ask My Mom, in which she plays both herself and her mother doling out advice to people even worse at life than Bamford’s on-stage persona.

Is her mom okay with you doing impressions of her on the Internet?

“She’s totally fine with it. I mean, you’d have to ask her when I’m not there, but to me, she always says she thinks I make her look great. And thin. Very, very thin.”

Bamford’s latest comedy Comedy Central CD/DVD special, Ask Me About My New God!, drops this month. The show is an adaptation of her The Special Special Special! show (rated one of comedy’s 10 best last year by Vulture), which was performed live before an audience of two: her parents.

For dedicated Bamford fans, though, this means that she’ll be hitting town with a whole new set, and she says she’s been writing a lot of material since her last tour through Montreal.

“I’m a little worried because I didn’t write down exactly what I did,” she says, pinching her voice into a panic whine, then taking two good deep breaths. “But I do have a lot of new stuff, so hopefully it will all work out.” ■