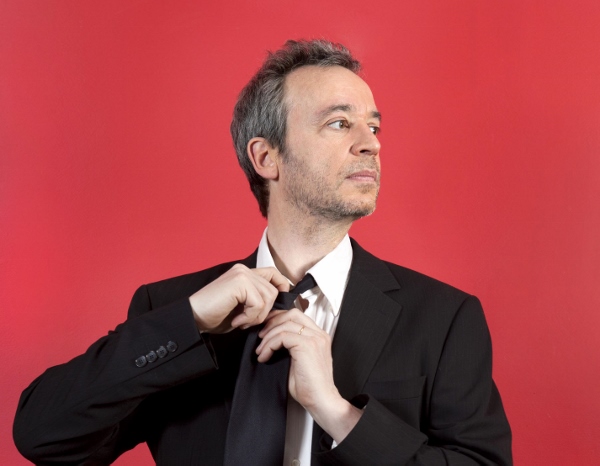 American-born pianist Laurent De Wilde began recording in the ’80s in the jazz crucible of NYC, learning the craft and working with luminaries like trumpeter Eddie Henderson and drummer Billy Hart. After a string of releases, from standard trio, quartet and quintet formats to groove-oriented techno outfits and piano-computer interfaces, as well as outings with singer Diane Tell and slammer Abd-Al-Malik, he’s back to the piano-drums-bass trio format with the recently released “Over the Clouds.”

“But I haven’t stopped electronics at all,” he says over the phone, taking a break from a rehearsal for a French event where he was to revisit ’70s funk and Afrobeat. “Actually we released two albums with piano and computer as a duo. My buddy at the computer, Otisto 23, samples me live and loops me and mistreats me and throws it back at me. But we’re using only piano sounds.”

For his sixth appearance at the Jazz Fest, he’ll be joined by Jérôme Regard on bass and Laurent Robin on drums, playing mostly material from the new album.

“Now the trio has a voice of its own, a sound of its own,” he says. “It’s very hard to make a piano sound differently these days. People have certainly succeeded in that, but it’s been a while since I’ve heard a piano, contrabass and drums album that doesn’t sound like a trio album, because acoustic instruments sound like they sound. You can bend the music, you can bend the intention, but you can’t really bend the sound, although I tried, particularly on one tune using some Blu-tack on the strings that muffles them and that makes the piano sound a bit like a balaphone.”

Whether playing acoustic or electric, traditional repertoire or contemporary, one of De Wilde’s endearing quirks is his approach to rhythm. “Rhythm is of the essence,” he confirms. “In our trio repertoire, we have 2/3 times 12 bars of swing. The rest of it is not swing, but we try to make it swing. The rhythm vocabulary is so vast and there are so many ways to swing that concentrating on just one expression of it can be very fulfilling. But for a guy my age and my generation, it’s very interesting to pick from the infinity of rhythms and inventions that are all around us.”

Thelonious Monk, one of the grandmasters of rhythm, was the subject of a book penned by De Wilde. “He had his own definition of swing, that’s for sure,” he says. In addition to that tome, De Wilde has published interviews with Herbie Hancock, made documentaries on Monk and Mingus and toured a literary-musical project with actor Jacques Gamblin, all this after leaving literary studies to immerse himself in the jazz life at the age of 22. “I’m now working on a book about keyboard inventors in the 20th century,” he adds. “Robert Moog, Harold Rhodes, Lawrence Hammond — all great inventors, and great contributors to the sound of today.”

Writing music is also a big part of what he does. “Composition is like film and performing is like theatre,” he says. “You have everything laid out in a timeless kind of way and you can assemble things together and tell a story and just recapture the breathing of one listening, of one reading — that’s artefact, that’s the cinema and that’s the writing of music and of books, too. When performing, you’re using a completely different part of your brain and that’s more like theatre. You’re live and you better hold to your instrument and make it good, otherwise everything sinks.”

As a North American-born resident of Europe, De Wilde has been equally immersed in both worlds. “Each is quite different, with pros and cons on each side,” he reflects. “In America, you have an enormous reservoir of musicians. The presence of jazz in North America is just overbearing. It’s really part of the culture. Which it’s not here. Living in New York was such a great experience and it’s such a magnet for great musicians, there’s such a high level of professionalism and playing and inspiration — it’s really a great place! That’s the pros. The cons might be because it’s so much part of its culture it has one way of expressing itself that kind of resists any change. When jazz musicians want to do something a little modern, they just go hip hop. It’s the usual bridge from one music to the other for jazz musicians. I would say that’s the shortfall, and even if there’s a lot of things happening in North America in terms of ‘alternative jazz,’ it’s much more marginalized than in Europe where we have no definition of what jazz should be.”

Europe’s relatively more recent adoption of jazz has its problems, though, “because having no real roots doesn’t give you a very clear idea of who you are and where you are in the chain,” he says. “On the other hand, it gives you a lot of freedom to imagine different things and to depend on your own background and inspiration, and it takes music in very unexpected places.” ■