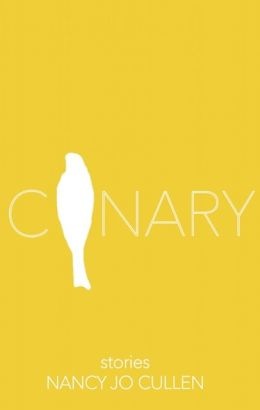 Canary is Nancy Jo Cullen’s assured debut short-story collection, following three well-received volumes of poetry. Cullen, now based in Toronto, was originally a westerner, and the suburbs and cities of British Columbia and Alberta serve as the backdrop for these vibrant stories. Published by Windsor, Ontario’s Biblioasis, Canary once again proves the press’ commitment to releasing books by new Canadian voices.

The characters in Cullen’s short stories are honest and self-deprecating working-class Canadians. As they struggle with their relationships and family entanglements at mid-life, they reflect on their wild years of adolescence with a mix of tender yearning and deep mortification. As they puzzle out who they are, the impulsive nature of youth often returns unexpectedly. In “Valerie’s Bush,” for example, the title character mourns the breakup of her long-term girlfriend by getting her first Brazilian wax and pitching a rock through her ex’s front window.

Cullen’s stories are full of these unexpected moments of giddy freedom, when the heavy responsibilities of daily life lift, and the characters can take a deep breath and remember who they really are.

One of the best stories, “Happy Birthday,” is narrated by Katie, a middle-aged housewife who is stuck in a rancorous long-term relationship with Lydia. A Type-A personality, Lydia resents being the household breadwinner even as she completely avoids helping Katie with childcare. When the tensions between the two boil over at a family function, Katie storms off and makes an exhilarating impulse decision. Here a lesser writer might be tempted to launch Katie into a new life, but Cullen is true enough to Katie’s character to let us known that this is a brief moment of cathartic rebellion, rather than a life-changing departure.

The stories in Canary don’t only romanticize impulsive behaviour; they also explore the collateral damage when someone seeks their bliss without bearing in mind their responsibilities to others. In “Ashes,” Jeanine reflects on the summer when she was 16, when her mother left home to have an affair. She details with heartbreaking clarity how the next day her father took solace in hard liquor, Chinese take-out and a new tabby kitten. In “Big Fat Beautiful You,” the narrator’s sister Caroline struggles with her twin feelings of liberation and remorse following her husband Jerry’s death in a room “littered with makeshift crack pipes.” Even in the midst of grief Caroline guiltily admits that during her husband’s painful descent into deep addiction, there were many times that she had wished he was dead.

Canary is full of such moments of intimacy, when readers are allowed a glimpse of a character’s hidden life.  In “The 14th Week in Ordinary Time,” the pregnancy of George’s wife inadvertently causes him to recall his years as a pretty disco boy attending a weekly sex party where he would get busy in “an apartment crowded with groaning and pounding men.” In this story, Cullen reveals that such moments of licence can be fleeting; for George, they are replaced by long-term care for his sick mother.

Nancy Jo Cullen’s stories offer stirring glimpses into the tension between her characters’ past and present lives, and between the responsibilities of commitment and the fleeting joys of impulsive behaviour. The narrators of these stories are plain-spoken, and while they sometimes over-share the messy details of their lives, they always tell it like it is. The stories collected in Canary are fresh, immediate and exciting. ■