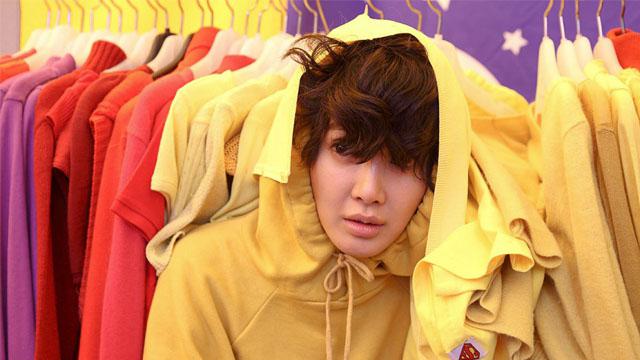 Lee Si-Young in How to Use Guys With Secret Tips

Directed by Hideo Nakata, the man behind the landmark 1998 J-horror film Ring/Ringu (as well as Dark Water), The Complex depicts hauntings and other odd goings-on in the apartment building that Asuka (Atsuko Maeda) has just moved into. (The actress, incidentally, came to fame as a member of “Japanese idol” group AKB48, yet her acting is not terrible. Nor is it exceptional.) The trailer distills the scary into a fairly compelling couple of minutes, but the film moves slowly, and dwells too long on the helpless female thing that a lot of non-Western horror remains mired in. Strangely, the horror tropes and clichés in The Complex aren’t all Japanese — there’s haunted house lore and even a touch of exorcism. But with its glacial pacing and dreary pall of a plot twist, you could throw monsters and Bruce Campbell at this thing and it would still feel boring. (Well, maybe Campbell would pick it up.) (LC)

Missionary is a powerful psychological thriller, and another testament to the sheer quality of contemporary American indie genre films. It centres on a young Mormon named Kevin, who is on a mission… to find his family. His clean-cut All-American veneer cracks to reveal his dangerous, obsessive nature when he finds his “family” in Katherine and her son Kesley.

While the patriarchal narrative is not unfamiliar, Missionary is very skillfully developed, with carefully built tension and strong character development. The film has a clear vision of the twisted version of the Mormon ethos that drives Kevin and how everyone’s bad but well-intentioned decisions determine their fates, especially Katherine’s. As things escalate, the story remains frighteningly plausible, with a most persuasive and interesting commentary on the utility of restraining orders. This is demonstrated in the climactic axiom, “Never wound what you’re not prepared to kill.” See it!! (KF & MC)

How to Use Guys With Secret Tips

Lee Wonsuk’s How to Use Guys With Secret Tips is like a charming Korean Amélie. The film is colourful and quirky, using animation and effects to create the comical world of Choi Bo-na (Lee Si-young). If you’re not really keen on horror flicks or if you just want a break from the gore — this is the perfect lol-inducing flick for you to check out.

Bo-na is frustrated with her workplace as she notices gender inequalities. She’s never promoted or given the proper credit although she is likely the most qualified and talented person at the advertising production company that she works for. She enlists the help of a series of VHS tapes titled How to Use Guys With Secret Tips to get ahead. The films help her use her femininity to promote herself and take advantage of men in order to reach her goals. (The films are also hilarious in their own right.)

How to Use Guys With Secret Tips is reliably funny from start to finish but it also presents some serious questions about gender roles and relationships. It also manages to make a basic love story seem unique and fresh with the help of a little deconstruction. (KMH)

There’s a lot that’s familiar in the set-up of Big Bad Wolves, the sole Israeli production of this year’s festival: it’s reminiscent of Mystic River and the film plays out like any number of post-Tarantino movies where one of the characters spends a significant amount of the film tied to a chair (Suicide Kings, etc.). Where it lacks in genre originality, however, it makes up for with its off-kilter style halfway between Oldboy and Amélie (!).

A grieving father kidnaps the man he suspects has raped, killed and beheaded his young daughter, hoping to find out where the rest of the body is. He strings a disgraced policeman along as an accomplice/fellow captive and the film gets more twisted from there. It’s rather grim material to spin jokes from, but the dark humour is well-served by a great cast and weirdly bright, airy direction that takes the material from grimy to brutally whimsical — certainly an unexpected way to spin the familiar torture-revenge scenario. (AR)

They discover a boarded up science room set for demolition which they decide to explore. Once inside, they find a human anatomy model which they graffiti with doodles and scribbles as well as other strange artifacts. At midnight, the model (Louis Thomas Jerome Kunstlijk) comes to life along with his skeletal pal Goth and three gangster corpse bunnies. Kunstlijk enlists his friends to seek out the three children for their vandalism, not realizing that his attempt at revenge will only lead him to even greater tragedy.

The animation is incredible, the plot is entirely unique and engaging and it’s genuinely funny. The film can be arguably viewed as something directed at children — but like The Last Unicorn with its creepy Mummy Fortuna, After School Midnighters has the ability to give you a few goosebumps and appeal to all audiences. (KMH)

The British sci-fi film OXV: The Manual may be the most cerebral love story you’ll ever see. At its core are a genius, Isaac Newton Midgeley, and a prodigy, Marie-Curie Fortune, who meet at a school for child prodigies. Despite their immediate interest in each other, and Zac’s love for Marie, they must remain apart as they operate, quite literally, at different frequencies. (Their opposing frequencies cause them to repel each other. They can only withstand an annual minute in each other’s presence, during which time mother nature voices her discontent.)

The story of how Zac and Marie come together is an exceedingly complex one. Billed as “the world’s first scientific philosophical romance,” OXV has a fascinating conceptual framework that continually evolves, so the story you think you’re watching turns out to be about something completely different. It addresses themes of equality, inequality, fate, free will, love and control, always falling back on the mantra “knowledge determines destiny.” (KF & MC)

Bushido Man is the martial arts film boiled down to its very essence: eight fights in eight separate disciplines, joined together with the most minimal excuse for a plot imaginable. It’s an 88-minute film containing a good 78 minutes of non-stop bone-crunching, crotch-slamming, finger-breaking acrobatics… and almost nothing else. No film captures the passive act of watching someone else play a videogame so well: the lack of involvement, the hypnotic rhythm of repetitive motion, the meaningless rewards attributed to a victory (in this case, they’re scrolls). In a world where people post videos of themselves playing videogames on YouTube (and others watch), it’s not such an outlandish concept, but Bushido Man plays like an exercise in futility.

It’s not even that the fights are bad; they’re dynamic and varied, but the film gives us absolutely no reason to care whatsoever. The only exposition comes in the form of what the characters ate before each meal (the best way to know your enemy, they say, is to figure out what they eat) and by the time the really obvious third-act reveal comes around, you’ve just been privy to seven deadening fights with no connective tissue whatsoever. Martial arts purists may revel in this self-imposed emptiness, but it’s a whole lot of aggro for little payoff. (AR)

Eddie Mullins (former film critic at Blackbook) is a high-brow man with a low-brow sense of humour. He’s certainly the only guy who can convincingly ape Ozu in a scene where a guy takes a piss on his sleeping friend. His debut Doomsdays is an artfully constructed black comedy about a couple of low-lifes (Justin Rice, playing the blasé and hard-drinking Dirty Fred, and Leo Fitzpatrick as Bruho, a kind of Henry-Rollins-in-1984-level conduit of anger) who spend their days wandering upstate New York and breaking into cottages to steal their food and booze, convinced that peak oil will cause rampant anarchy and that they’re just getting a head start.

Shot in long, static takes and separated into vignettes, Doomsdays is a hilarious and assured first film that manages to feel both incredibly precise and spontaneous. Its mix of deadpan and braindead humour is unbelievably effective — Eddie Mullins has brought me back around to the fact that the slacker comedy is alive and well. (AR)

Eric Falardeau’s Thanatomorphose is a difficult film. Not only because it painstakingly chronicles every step of a woman’s decomposition while she’s still alive, but also because it does so in a molasses-slow and deliberate way. As a short film (or even as a mid-length film as part of an anthology, say), it may have been efficiently discomfiting and gross; at 100 minutes, it’s laborious and tiresome, an exercise in melding Cronenbergian body horror with the stretched-out tedium of a Chantal Akerman film. It’s going for hypnotic but only achieves it in fits and spurts.

There’s little plot to be found: a woman (Kayden Rose) in an abusive sexual relationship starts to find inexplicable bruises on herself, and then her hair begins to fall out. After a couple of days, she finds herself literally rotting away in her apartment. Rose gives a courageous and vulnerable performance, but the rest of the cast is rather uncomfortable with the English dialogue (of which there is admittedly little) and the film’s long sequences of suffering and/or tedious housework shift from being purposefully oppressive to just being plain dull. (AR)