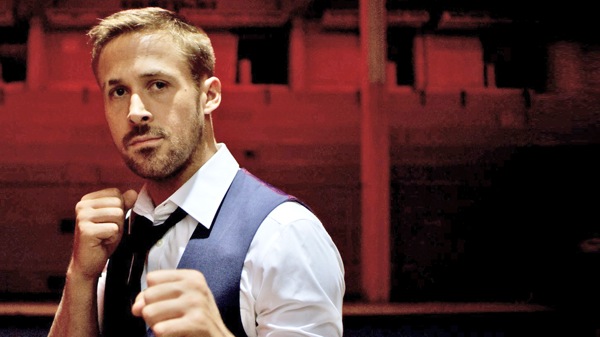 Ryan Gosling in Only God Forgives.

When I heard that the team behind Drive (writer/director Nicolas Winding Refn and star Ryan Gosling) were reuniting for a film, I was pretty stoked. Then when I saw the trailer for their new film, Only God Forgives, I was practically drooling. Reports from Cannes were withering, but I figured, how bad can it possibly be?

Well… it’s not bad, exactly. But coming after Drive, which I know I’m not alone in thinking was one of the best movies in years, it can’t help but disappoint.

Gosling plays Julian, an American in Bangkok who co-owns, with his brother Billy (Tom Burke), a boxing gym that’s really a front for drug running. But in a sense, Gosling is only a supporting player to Vinthaya Parsingarm, who’s arguably the real star of the film as Chang, a police detective with a high moral standard and a samurai sword strapped to his back.

When the nasty Billy kills a teenage prostitute, Chang allows her father to avenge her, thereby getting caught up in the family drama. This drama then increases exponentially with the arrival on the scene of Crystal (Kristin Scott Thomas), Julian and Billy’s fearsome mother. Much of Refn’s patented ultra-violence ensues, as well as a lot of creepy Oedipal stuff. Refn has said that he wanted to make “a movie that takes place in the vagina.” Make of that what you will (having interviewed Refn for Drive, I make of it that he just likes to say outrageous things that are sure to be widely quoted).

Scott Thomas’s performance as the ultimate overbearing mom is often terrifying, yet frequently slips over into camp. As for Gosling, the minimalist acting style that worked so well for him in Drive (and the recent The Place Beyond the Pines) is in need of a little diversity; it’s starting to seem a bit like doing nothing and relying on his good looks to do the work for him. Parsingarm, whose cold-blooded killing sprees are often followed by sentimental karaoke performances, steals the movie. Another highlight is the music by Cliff Martinez, whose synth soundtrack for Drive was overshadowed by the film’s copious use of 80s pop tunes, but who here concocts a brooding, sinister string score.

Refn is such a master stylist, and all his films are so different from each other, that I kept wondering if Only God Forgives was referencing some specific style of Thai filmmaking that I’m not familiar with. This would perhaps explain the film’s weird pacing, awkward editing and set pieces that are ridiculously over-stylized without actually looking cool. Again, Drive was so stylish that you have to figure Refn knows what he’s doing. But whether it’s intentional or not, awkward is awkward. Personally, I’m going to let this one slide and look forward to Refn’s next effort.

On a local note: Cinéma du Parc is the only theatre showing Only God Forgives not only in Montreal but in Quebec overall, with other theatres boycotting the film because it’s being simultaneously released on VOD. At the same time, although it’s advertised as being in English with French subtitles, a lot of the original dialogue is actually in Thai, so the bilingually challenged are out of luck. ■