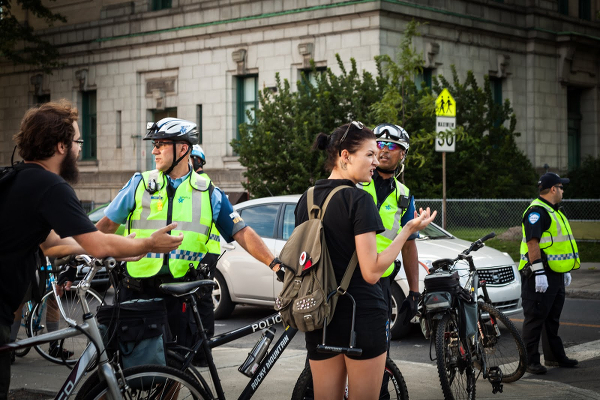 Critical Mass, the bike ride that takes place on the last Friday of each month, was derailed by police last week. About 100 cyclists gathered at Phillips Square, where they were met with a small police presence that grew to include about a dozen officers on bicycles and a few in cars and vans.

A tense, circuitous trek around the city — during which one cyclist was pulled over for knocking down traffic cones — came to a head on Beaver Hall, where, photographer Justin Canning says, police ambushed the Critical Massers. The police threw cyclists from their bikes, causing at least one rider to hit a building. Another was pushed head first into a pole while attempting to escape through an alley.

In the end, about 15 participants received $500 fines for violating highway safety code 500.1, which states basically forbids any kind of “concerted action” to obstruct traffic on or access to “a public highway” in any way.

This is what things looked like from Canning’s perspective.