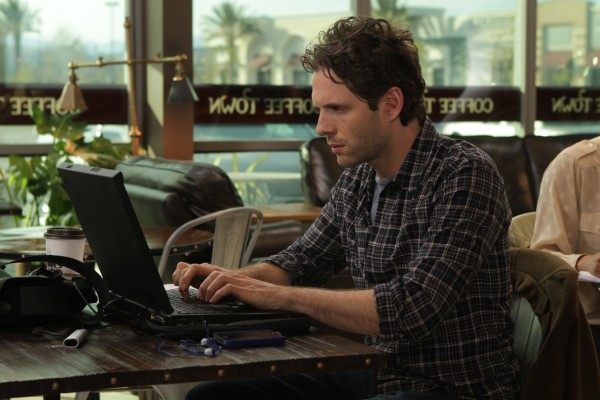 Glenn Howerton working at his “office” as Will in Coffee Town (Photo Credit: CollegeHumor)

CollegeHumor have been kickin’ around since 1999 providing us with hilarious original web content, videos filled with comedy cameos, as well as curating lol-inducing items from around the web — it’s no surprise that they’ve decided to expand to feature-length films.

Just for Laughs will be hosting the premiere on Saturday of the brand’s first feature Coffee Town, directed and written by Brad Copeland, who is best known for his work as a writer and producer on Arrested Development.

The film stars Glenn Howerton (It’s Always Sunny in Philadelphia, The Cleveland Show) as Will, a website manager who works from his favourite local coffee shop. When it is suggested that his ‘workplace’ will be transformed into a bar, he begins developing schemes with his two pals Chad (Steve Little, Adventure Time) and Gino (Ben Schwartz, Parks and Recreation, House of Lies) to stop this change from happening. Josh Groban plays Sam, a disgruntled barista, who offers his own set of challenges for Will.

“It was perfect because it was my first directing opportunity, and it was also their first opportunity to establish themselves as a movie brand,” says Copeland. “They were excellent partners because they’re people that know comedy. So they’re not coming from a place where — like someone in a studio would be — [they’re] trying to meet a bottom line or trying to keep shareholders happy. They’re just a factory of comedy and they wanted to put that money on the movie and that was really the only restriction: was that it was funny.”

The idea for the film sprung from Copeland’s many trips to Starbucks throughout his own work day and the observations he made of the coffee shop’s clientele. “I write usually out of an office but I go to Starbucks three or four times a day, because as a writer I’m sure you know too, procrastination is the name of the game. I would just go there and then one day I looked around and I was just kinda like — this is a world that no one’s really told a story about. Look at all these people in here! Why are they here? What is the subculture? And I had this kind of nagging question in my head of: ‘How do they go to the bathroom?’

“They have all their laptops out and their power cords and all that, and I’m like, it’s gotta be a pain to go to the bathroom and have to pack all that stuff up. But I sat down and watched. I just wanted that question answered. And then I saw that they look at each other, and kinda give each other a little nod [to say] like basically, ‘Hey, watch my stuff, I’ll be right back,’ even though they don’t know each other. And then I realized there was this social subculture there. And I knew then that it was a great idea for a movie. I actually just sat in Starbucks over a period of three or four days and outlined the entire movie and came up with all the different characters. Who would drift in and out of that world, just by observing,” explains Copeland.

He wrote the film in two weeks, then submitted the finished product to receive grammar notes — only to receive the news that CollegeHumor wanted to make it. The entire process moved very quickly compared to industry standards.

Another unexpected piece of luck came with the casting of heartthrob baby-faced opera singer Josh Groban as a grumpy, snarky barista. “Josh came in, he was completely unexpected,” says Copeland. “We were looking at kind of an angry Aaron Paul who’s on Breaking Bad. We were just thinking who could be our cool, funny, angry barista. And you would never think of a very sweet opera singer that’s on morning talk shows as this guy. So I met with him. And he came in and read with Glenn and was unbelievable. He was just an absolute natural. We knew then that he was the guy.”

I also asked Copeland about the recent season of Arrested Development which he sadly couldn’t help out on as he was editing Coffee Town at the time. “I liked it. I’m biased,” he says.

“I love the characters so much and I love the actors and they’re all such friends — I loved it. But I’m not looking at it from a perspective of a fan. I’m looking at it from the perspective of a guy that’s seeing all of his pals and buddies on there doing all the funny things that make me laugh. Tony Wonder the Ben Stiller character was one I actually created, so it was just neat. Like going to a high school reunion.

“It was really ambitious the way they did the storytelling. And I know that backfired a little bit with the original fans but I liked it — I thought it was great,” says Copeland.■