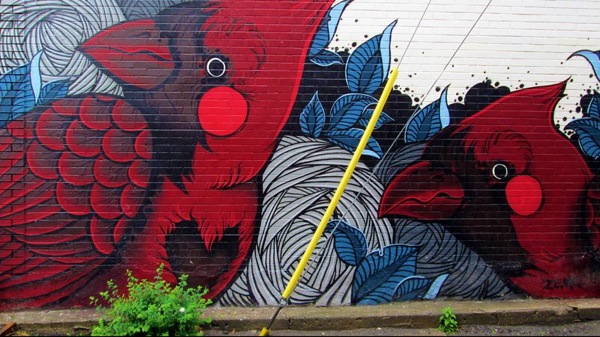 If Montreal’s walls could talk, what would they say? From loud layers of graffiti in St-Henri to faded advertisements on Old Port brick, the city’s walls mirror its aesthetic and social diversity. From June 13–16, MURAL will give the Main’s walls something to talk about by adding 20 permanent murals by international and local artists to Montreal’s cityscape.

“We have so much local talent in Montreal, and we were asking ourselves why we didn’t have something like this over here already,” Bathalon, MURAL’s press relations coordinator, said at the official unveiling of Mural’s lineup in May, adding that the festival would help stimulate the artistic community. “Creativity leads to more creativity.”

Along with local creative marketing company Écorce and the Société de développement du boulevard Saint-Laurent, the LNDMRK team was able to make the MURAL festival a Montreal reality.

Local graffiti artist Zema has been painting the streets of Montreal for over 15 years, and is participating in MURAL as part of the Paria graffiti crew she co-founded. While she’s excited at the opportunity to meet with international artists like ROA and Pixel Pancho, Zema is most appreciative of MURAL’s inclusion of artists who both depart, and arise from, core graff.

“Compared to when I started writing, I think there are a lot of graffiti events that have lost some of their original character, and sometimes local artists feel less inclined to participate. I’m happy there are new developments including artists who are graffiti-based and those who aren’t,” Zema says. “It’s also not a commercial event, because so many festivals and fairs end up feeling like the same thing. This is really different.”

Although members of the Paria crew, who hail from all across Quebec, have drafted their plans for the mural, excitement over painting is keeping the plans from being totally finalized.

“We have the paint chosen, but we’re still going, ‘What if we change this, or do that instead?’ There’s an element of improvisation to it,” Zema says. “And although we’re not that young, when you get us in front of a mural and give us cans, we get totally excited, like kids.”

Brooklyn- and Baltimore-based artist Gaia is one of the international talents in Montreal for MURAL. His interest in creating works specific to a building’s architectural and social dimension has fed into the creation of two murals in the city so far, one of which depicts the transformation of the Redpath factory, each of its stages held by a large hand.

“I wanted to make something site-specific. The Redpath had undergone this transformation from its original factory to an abandoned building to luxury condos. I was interested in that topic — how do factories stay alive? How do they transform and change?” Gaia says, adding that the hand imagery speaks to the manual labour involved in factory work. “It’s something that connects with people’s fascination with the romantic past. A return to something simpler, more primitive, physical.”

Montreal-based group MTL ZOO will also be making a comeback at MURAL. This time, according to Olivier Bonnard, who is also painting for MURAL, he and MTL ZOO co-founder Fonkee have involved older, more established artists in the group of mostly under-25s.

“For our show at le Divan Orange, we’ve really reached out to artists like Jason Botkin and Johnny Crap to show their work with us,” Bonnard says. “So MURAL is a chance for us to get our group and our work seen too, and to grow together, and with the festival.” ■