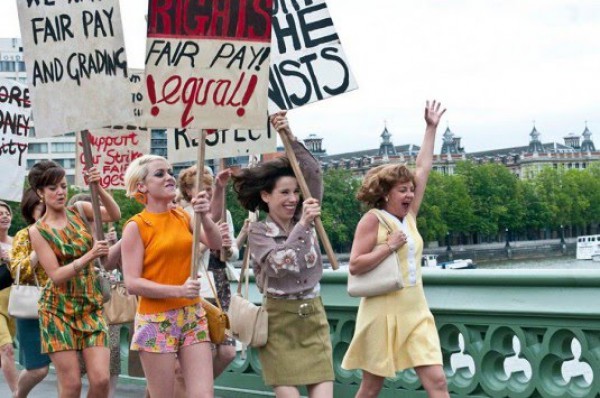 Women request equal rights in Made in Dagenham

Feminism is a loaded term. It makes some ladies jump up and scream “hells yeah!” and induces others to inch away as it’s clearly synonymous with man hater. The level of discomfort that has come along and encroached itself on the term suggests that perhaps there should be more discussion and a reorganization of ideas. A new film series, When Cinema Falls in Love with Women at Cinéma du Parc, aims to do just that.

The programme was designed by intern Hélène Monin and was spurred by her own interest and desire for discussion about some of these difficult women’s issues. “We have so many ideas of feminism, and I do too,” says Monin. “I’d like to look into that and see what feminism really is. I want to break all the stereotypes that we have about women. It’s not about trying to put women in front of men. It’s more about having the choice to say yes or no, to have that liberty to choose how we want to be in society.”

She has selected six films that each discuss different women’s struggles, and after each screening she has invited professionals from related fields to make a presentation (in French), followed by a discussion. “I don’t want to make the event just black and white, I want to have a discussion and to see where we are today in relation to these topics,” says Monin.

The series begins with Made in Dagenham, about the 1968 strike in the Ford Dagenham plant where female workers protested against sexual discrimination in the workplace. The presentation will be made by Marylin Ouellet and Jennifer Grenier, representatives from Action Travail des Femmes (ATF), who will discuss why wage inequalities continue to exist and the resistance to equal pay. Next is The Piano, the story of a mute woman and her daughter being sent away due to her arranged marriage. Sophie Deraspe, director and cinematographer, will discuss how social issues can be extracted through the conventions of filmmaking. Then there’s Dangerous Liaisons, about the Marquise de Merteuil trying to keep her independence and reputation as a widow, while still enjoying the pleasures of the flesh. André Jacques, a psychologist and psychotherapist who teaches in the Communications department at UQAM, will speak about the sex-positive movement in relation to the Marquise, also relating back to today.

German film When We Leave is about a woman and her son struggling for independence and safety from her dangerous husband, and the role that religion plays in keeping her from that safety. Johanne Philipps, a doctoral student at the Université de Montréal in religious studies, will discuss where the limit is between the imposition of freedom and the respect of religious culture. Romanian film 4 months, 3 weeks, and 2 days discusses the struggle of two women during the 1980s dictatorship trying to have an illegal abortion. Sophie de Corde, General Coordinator for Planned Parenthood (FQPN), will discuss how in a democratic country like ours, where freedom is a fundamental right, we’re still debating the ability to terminate pregnancies. Finally, the documentary Male Domination which discusses gender stereotypes, ends the series. Mélissa Blais, who is in the film and a sociology doctoral student at UQAM, will discuss masculinism and other ideas surrounding gender in her presentation.

“I am sensitive to these questions and I don’t know everything about the questions that I have,” says Monin. “So I want to hear some answers and I want to meet people and hear their perspective and point of view.”■