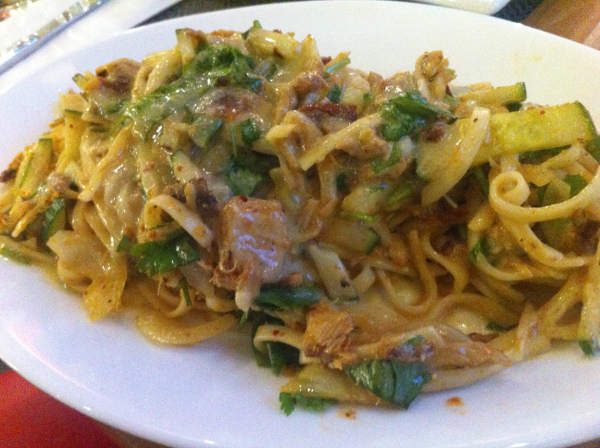 Imagine a mash-up of the best parts of Thai and Indian cuisine. The result would be Burmese food. And, as you can guess, it’s really fucking good.

My first taste of Burma was in San Francisco, at the hugely popular Burma Superstar. It was an eye-opening experience, but was one I thought I could never repeat here. A Google search and an interrogation of my half-Burmese colleague confirmed my fears: There were no Burmese restaurants in Montreal.

That changed with the opening of Ruby Burma in late April.

The restaurant, located on a corner on St-Laurent that used to house an underwhelming café, is still figuring things out. There may be missing utensils, misunderstood orders or mishaps at the cash register, but the food is, for the most part, on point.

Salads are where Ruby Burma –– and the flavours of Burmese cuisine –- shine. All the salad options sound delicious (the menu boasts that one of them has 24 ingredients), but we limited ourselves to two: the tea-leaf salad, one of Burma’s most well-known dishes, and one of the noodle salads (forgive me, reader, but the name escapes me). They were our favourite parts of the meal.

The tea leaf was one of those meal-brightening dishes in which no forkful is the same. With a sour-funky fish-sauce dressing, shredded lettuce, tomatoes, crunchy bits of nuts and garlic and, yes, tea leaves, it made us forget all about the St-Laurent street-fair meat we had wistfully passed on our way to the restaurant.

Though the noodle salad is supposed to come with flat rice noodles, our waiter suggested we try it with egg noodles. Those came topped with shredded chicken and cucumber slivers, and were doused in a creamy coconutty sauce. My dining companion put it succinctly when, between mouthfuls, he stuttered, “Oh, man. This is good.”

We also ordered an appetizer of Burmese ravioli and mains of chicken curry and mohinga, a fish noodle soup that is, apparently, one of the national dishes of Burma. The ravioli were like egg rolls with the filling of a samosa –– a deep-fried, paper-thin wrapper with a curried potato inside. Despite their ingredients and mode of preparation, they were light and non-greasy, and came with a tasty tamarind dipping sauce.

The chicken curry is unlike Thai or Indian curries. It was served in a tomato-based sauce that was enjoyable, but not as special as the other dishes we tried. Next time, I would order another salad in lieu of a curry.

The mohinga was thick and pleasantly fishy. It comes with a separate plate of garnishes, which the waitstaff heartily encouraged us to use.

We did, and the addition of chives, cilantro, a chili spice mix and, especially, lemon vastly improved the flavour.

Perhaps because of the scarcity of Burmese food here, Ruby Burma’s staff is hyper-aware of offending Western palates with unfamiliar flavours. That means that you’ll have to exaggerate your requests for spiciness. But the owners are also disarmingly transparent about their operation and are eager to chat about authentic Burmese cuisine and to hear feedback on their dishes.

Ruby Burma’s not perfect, but it’s working out its kinks. With most of its quite-substantial dishes hovering around $10, it’s also cheap. And it’s a Burmese restaurant in Montreal. It’s the only one we’ve got, and that’s reason enough to go. ■