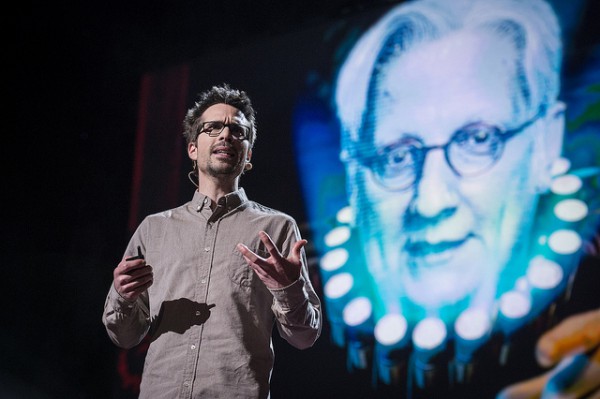 Quebec filmmaker Martin Villeneuve was at the Whistler Film Festival this past December promoting his new film, Mars et Avril, when he was given a phenomenal opportunity. TED (Technology, Entertainment, Design) curator Chris Anderson was in the audience, unbeknownst to Villeneuve, who at that moment was providing Anderson with an audition for his own stage.

“When he came towards me I recognized him because I watch lots of TED talks, so I knew who he was,” said Villeneuve. “He gave me his business card and said, ‘We’ll be in touch.’ Two months later I was on the TED stage.”

The invitation to speak at the conference, although a welcome one, did not come stress-free. The stage is international and has been graced by professionals from a wide range of fields: presidents, scientists, celebrities, prime ministers, etc. It also has its own set of rules. “You cannot learn the text by heart, to get on the TED stage it’s forbidden. And you cannot read from a teleprompter, that’s forbidden as well,” explains Villeneuve.

“You have to be as true to yourself as possible, they validate the structure before, and most of the time they challenge you and ask you for a certain thing. Chris Anderson asked me to basically repeat what I said on the stage at Whistler and I said ‘Mr. Anderson what did I say on the stage at Whistler, because I don’t remember?’ He said ‘Well you talked about how these constraints actually boosted the creativity of your film, how it fueled the creativity. So, how you basically turned problems into opportunities.’ So that’s what I did.”

Villeneuve explained how afterwards it was hard to remember his actual experience during his talk, he could remember the preparation but not his actual time on stage. “It’s really intense and surreal. You have to just concentrate and focus on what you have to say and hopefully it comes out naturally, even though nothing about it is casual. It’s very, very stressful … even experienced speakers say that TED is one of the most intimidating stages in the world. It’s an overwhelming thing.”

Since his experience at the conference, Villeneuve is already reaping some rewards from the networking TED enabled. “The day after my talk I was asked by them to book some time because people would like to meet me. What happened is, a car came and took me at the hotel and brought me to Hollywood and I had a meeting booked at Dreamworks pictures, Lucasfilm, Disney and Kennedy/Marshall. They were all there at TED and I was the only one this year, surprisingly, talking about cinema. I am a nobody who has done a two million dollar film that, in their eyes, is worth 10 times more at least, so they were really, really, curious.”

“This is the greatest accomplishment for me, being able to go to TED … Your first feature film is for you to get noticed and to have your voice heard. I think that happened, because I feel the resonance, the positive echo from my film.” ■

Villeneuve is already working on a treatment for his next film. You can watch the full TED talk below to learn more about his experience creating Mars et Avril.