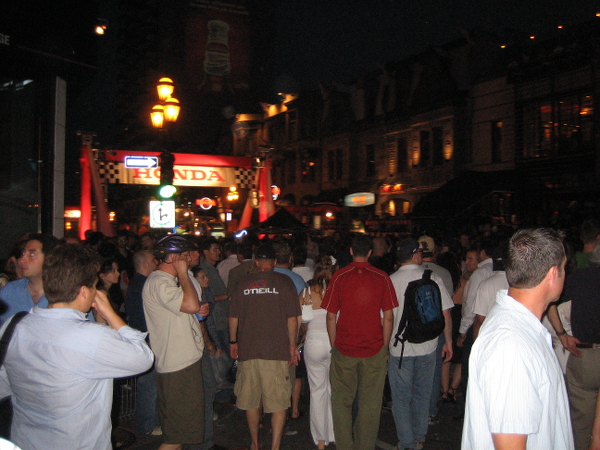 Formula One in all its glory. Photo via Flickr

Dear friends, it was that time of the year again — in case you didn’t notice. The time of the year when the downtown core of our beautiful city becomes a free symphonic orchestra of engine-revving for all to enjoy. The time of the year when the Ritz Carlton, in the middle of rush hour, will line up its guests’ luxury vehicles in front of the hotel to show that, yes, its guests are rich enough to risk damaging their Ferraris. The time of the year when it becomes socially acceptable for grown men to regress to toddlers and compete over the size of their bottles, cars, egos and penises. Yes, Grand Prix weekend just wrapped up, and although I would have preferred hiding under a rock, in the name of serious journalism I headed to the F1 hub that is Crescent at 2 a.m. This is who I met. 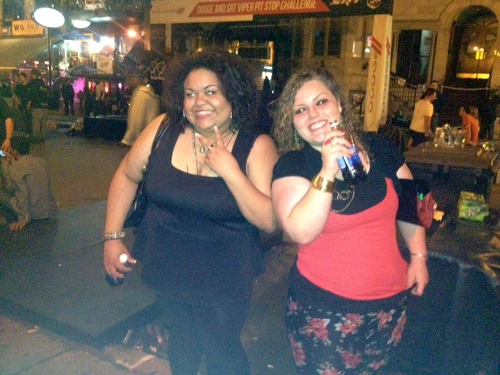 AD: Are you planning on getting that number up?
B: Oh, fuck yeah.

AD: So essentially you want to black out?
L: Black out? Yeah.
B: No, no blackouts.

AD: Did you girls come out specifically for Grand Prix?
L: Yeah!
B: No, we didn’t.
L: Well, it was part of the reason.

AD: Do you often come out on Crescent?
B: Always.
L: Yeah, man. Crescent is our street.

AD: Why?
L: Because Crescent is where it’s at.
B: Crescent is the fucking party centre of the world.

AD: You’re not really sure about anything, are you?
B: I’m never sure.
L: I’m getting it in!

AD: How long ago was high school?
B: Eight years ago.

AD: Where is the Democratic Republic of Congo?
B: What the — damn, shit just got serious. What is this Congo? What, did you think I was African?
L: But you’ve been to Africa.
B: I did two times, but I’ve never been to Congo. 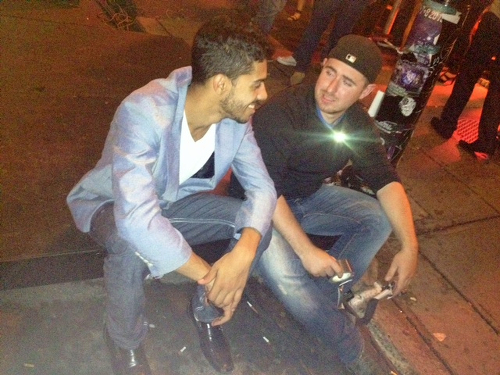 AD: Why are you playing with a piece of duct tape?
Sebastian: Because it’s fun. I found it on the ground, and I don’t know. It’s fun to play with.

AD: Is it your best friend now?
S: No, just my part-time friend.

AD: Is that who you’re planning on bringing home?
S: Yeah.

AD: So I gather you’re not having any luck tonight.
Alessandro: What, this is not luck? Man, if a guy has duct tape, you know he’s getting lucky tonight.
S: Maybe I can make a condom out of this.

AD: Why are you hanging out outside right now?
A: Because we lost our people.
S: What he means, actually, is that we lost our friends.

AD: Where are they?
A: I’m sorry they don’t have a GPS up their ass. Maybe you should go find out and let me know.

AD: Ouch. Where did you guys go out tonight?
A: Karina’s.

AD: Why did you guys come out on Crescent?
A: Because I heard the party is here. We are from out of Montreal; we heard Crescent is the place to go. And we did.

AD: And are you disappointed?
A: No, I made out with three chicks. Did I bring them home? No. But you know what? I have a great time. Formula One. Girls in booty shorts girls who want to make out with me because I’m good-looking. Hey, I have no problem with that! 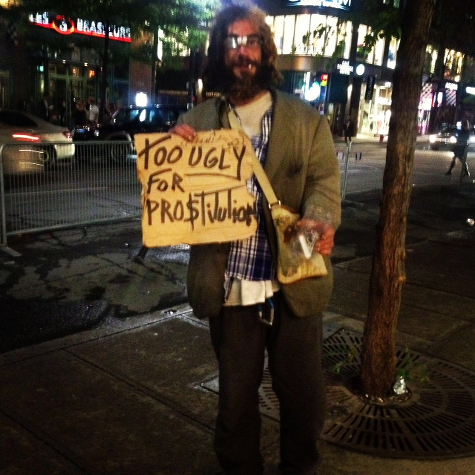 AD: Okay, so what did you do tonight, Toby?
Toby: Oh, I was bumming around, getting drunk, getting stoned. But I don’t have my weed resource until tomorrow.

AD: What do you think about Grand Prix and the people it attracts?
T: Well, they’re a bunch of pricks, but at least there are more people, so I’m all right.

AD: So how much money do you make?
T: Listen — the biggest donation I’ve ever received was $24,000. And it was not on Grand Prix weekend.

AD: What did you do with it?
T: Fucking partied and treated everybody.

AD: How long have you been bumming for?
T: I’ve been a fucking bum for 15 years now.

AD: Work?
T: Yeah. I’m 27, don’t forget. I was 15 the first time I got in the streets, and I loved it. Squeegeeing cars, getting drunk, getting fucked up.

AD: Do you have any passions or pastimes?
T: Making people smile.

AD: That’s really nice! How does it feel to be famous?
T:  It feels great, if you want to know. I’m on Reddit! I made the front page of Reddit two years ago!

AD: Do you think you are the most famous bum in Montreal?
T: In Montreal? For sure. I’ve been voted.

AD: Who are some other famous bums?
T: Well, that one-armed guy Mike. Then there’s Hollywood — that black guy that robs people with a banana — and the fucking Spoonman. I can’t remember his fucking name.

AD: Why do you think you are the most famous one?
T: Because I’m the fucking best.

AD: Lastly, how did you come up with that sign?
T: I was on the sidewalk, asking people for money for beer, and this drunk asshole coming out of the strip club came in front of me and told me that he would pay me to suck his dick. My buddy punched him out and that’s what made me come up with the sign “Too ugly for prostitution.” Drug foundation no obligation, but I’m too ugly for prostitution.