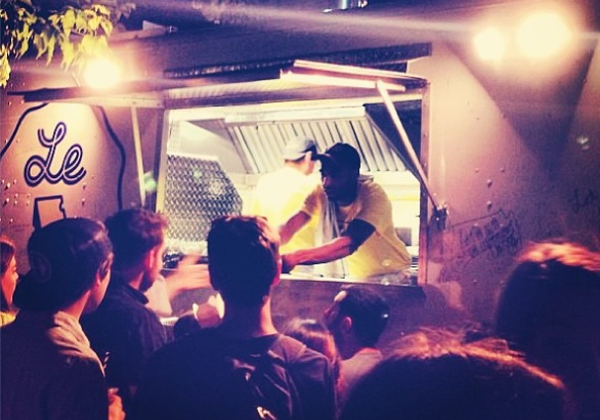 We’re not exactly playing it cool with the food truck thing. But denial and demand go hand in hand, so perhaps our breathless reaction to the loosening of street-vendor laws is justified. Yes, some mobile restaurants may be hiring publicists to organize launches. We may have to contend with the whims and prices of concept trucks while still being unable to grab a $2 hot dog off the sidewalk. And, yes, our dear city has made it so that these free-roaming vehicles really can’t roam that freely (sorry, downtown office workers — you’re mostly stuck with food-court options). But we’ve taken a step in the right direction, and could anything that encourages entrepreneurship in our opportunity-starved city be that bad?

We spoke to Pascal Saltzman, the 24-year-old owner of le Cheese and a self-described “nice guy just trying to start a food truck,” to get a sense of what cheesy delights he’s slinging and what it’s like to set up a moveable feast in Montreal.

Gemma Horowitz: What is a cheese truck?
Pascal Saltzman: I can’t speak for every cheese truck, but ours is all about cheesy, nostalgic comfort food.

GH: Why do you think Montreal is ready for “cheesy notalgia”?
PS: We love the idea of using local produce, and obviously that’s something that’s really common right now with restaurants. We’re like, “cheese!” “Quebec!” It’s, like, synonymous. There’s always a market for it. People love cheese.

GH: Is the bureaucracy involved in establishing a food truck here as sucky as it seems?
PS: If you had just ridden shotgun on my day today, you would have gotten a perfect taste of the bureaucracy that we have to go through. It is definitely not easy. I think everything in this province is a little complicated sometimes. They don’t make anything simple.

GH: So it’s basically like, “You can have food trucks, but we’re going to make it as hard as possible for you”?
PS: The idea, I think, was a lot of the main reasons why they didn’t have food trucks was because there was such a big backlash from restaurants…

GH: Even though it’s perfectly okay in every other city?
PS: I guess we’ve got some interesting quirks in our city, in our province.

GH: You used Indiegogo to help fund your venture. Was it easy to convince notoriously poor Montrealers to give up their dough?
PS: We’ve raised almost $4,000. Obviously a lot of friends and family were the initial donors. But then people come out of nowhere and were like, “This seems like a cool idea.” Complete strangers have given us hundreds of dollars.

GH: What is the cheese truck going to smell like in summer?
PS: Well, we do have fridges to keep all the cheese cold.

GH: I think people envision a truck stocked with shelves of festering brie.
PS: Well, the actual truck itself is built of cheddar. Just kidding. All of our cheese is very well refrigerated, well preserved. There’s no bad smells, nothing like that. We won’t be stinking it up too bad.

GH: Where can we find it?
PS: We’re gonna be roaming around the city at a variety of different events and spaces throughout the summer. We’re on Twitter at @lecheesetruck. We’re on Instagram and Facebook. We’ll be posting all our events through social media.

GH: So are you only events-based, or can we find you on the streets on any old day?
PS: It’s mostly events. Those events at Lachine, for instance, are on a fairly regular basis. But we won’t be just roaming around the city, no.

GH: Your title is the Big Cheese. What does that mean in layman’s terms?
PS: I’m just the guy who had the crazy cheesy idea. We have a great group of people and are just trying to have some fun. We just thought it would be a good time to start a really high-risk business we know absolutely nothing about. ■