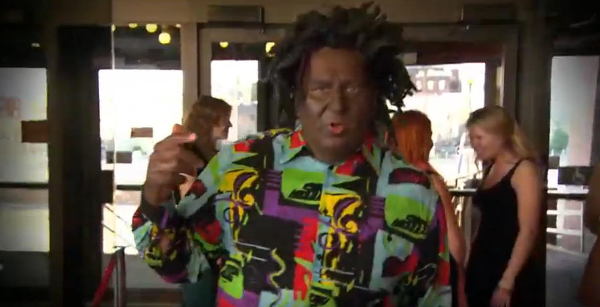 You’re all bunch of racists. Yes, you! Don’t look around to see if I’m pointing my finger at someone else. I’m looking at you!

There, we’re off to a good start now that I’ve buttered you up.

In recent weeks, the word racist has been tossed around with disturbing frequency. It’s not alarming because racism is on the rise, but because so many people seem to use the accusation as a label of first resort. If you don’t know what I’m talking about, let me explain.

At le Gala les Olivier, a Quebec comedy award show aired on Radio-Canada on May 12, host Mario Jean performed in a sketch/song (you can watch it here) that was intended to imitate, and pay tribute to, some of the province’s best-known comics. Among them was Boucar Diouf, a Quebec comic of Senegalese origin. To portray Diouf, Jean wore an African Dashiki shirt, a wig with spiky black hair, a fake front tooth gap and… blackface.

Yes, yes, you’d think the folks at Radio-Canada had received the memo about the 130-year history of blackface in the U.S. and Canada and its role in denigrating blacks through caricature and gross stereotypes. But apparently not. The use of blackface on the show was largely ignored in French-language media until four days later, after Nydia Dauphin wrote an opinion piece for the Huffington Post entitled “Why the hell are Quebec comedians wearing blackface?” In the post, Dauphin started off with this:

“Quebec comedians have a strange affliction. It sporadically resurfaces time and again and it’s proven almost impossible to cure. No one really understands where the resistance to its cure (that being education) comes from. Some have come to suspect that it is self-inflicted; that somehow, they do not want to be cured, that they enjoy wafting in the stench of their ignorance.”

As a Quebec comedian, I don’t need to explain why I find Dauphin’s intro highly offensive, one that paints us all with a single, nasty brush. In other words, it stereotypes and ridicules a large group of people — many of whom I know would actually agree, as I do, with much of what she had to say. But she goes on to mention the “Quebec comedy scene’s sick obsession with blackface,” “the recurring obsession with ridiculing people of colour in my province,” and “this peculiar ailment afflicting Quebec society.”

Dauphin repeatedly denigrates an entire culture with sweeping generalizations and effectively alienates many potential allies within that culture, including Boucar Diouf.

In case you’re wondering — though the author shot that appeared in an earlier incarnation of this column may have led you to think I’m blue — I’m a white Catholic and a born-and-bred Quebecer. Et fièr de l’être.)

The response to Dauphin was fast et furieux in French-language media. Journal de Montréal bloggeuse Lise Ravary weighed in not once but twice in one day, with commentary that unfortunately showed that if some Quebecers are ignorant about issues of race and discrimination, you don’t need to look far to find out what feeds it. For example, Ravary brought up another blackface incident that occurred at the Hautes Études Commerciales business school in Sept. 2011. A group of students celebrating Frosh Week wore blackface in “tribute” to Jamaican sprinter Usain Bolt. They also paid tribute by chanting in mock Jamaican accents about the glory of smoking weed.

What lesson does Ravary draw from this? That the widespread local and international news coverage and condemnation of the incident should have raised awareness in Quebec that blackface is offensive? No. She instead complains that a CNN host was “incensed that the students cried ‘smoke more pot,’ a racist stereotype, according to (the host).”

“I didn’t know,” Ravary explains, “that Jamaicans constitute a race.”

Yes, Ms. Ravary, because Jamaicans aren’t a race but a nationality, they can’t ever be victims of racism or stereotyping. Brilliant analysis — move to the head of the race-baiting class. (And where was your outrage, Ms. Ravary, when Quebec writer Claude Jasmin last week trumpeted in a racialist screed that he was  “proud of my race” [Quebecers of French descent] in an op-ed piece in le Devoir?)

Believe it or not, Ravary wasn’t even the worst mainstream offender. (God, let’s not talk about the ignorance of many tweets, Facebook posts and online commenting.) Judith Lussier, a journalist working for the free-distribution Métro daily newspaper, added her own whitebread viewpoint in a story provocatively headlined “All Quebecers are racists.”

Lussier begins by admitting that she had never heard of blackface until reading Dauphin’s piece (a journalist who doesn’t follow the news — that’s never a good omen). She then goes on to write about a dialogue between herself and Dauphin that reads like a telephone interview in which Dauphin is being uncooperative. (It’s actually a brief exchange on Twitter in which — according to Dauphin — Lussier fails to tell her that a) she’s a journalist and b) it’s an interview for publication.)

The Métro column goes on to make several arguments to defend the Olivier sketch that were echoed all over the French-language media:

1) That because francophone Quebecers are generally ignorant of the implications and history of blackface, there is no taboo and therefore it’s not racist to use blackface. (So if Quebecers were unaware of the significance of burning crosses or wearing white hoods, that behaviour would be innocent, even if it was all over the news less than two years earlier?)

2) How else was Mario Jean to imitate Diouf if he couldn’t use blackface? (The African shirt, dreadlock wig, accent and tooth gap wasn’t enough? Maybe he should have pulled out a big schlong and danced with a natural rhythm while shooting baskets.)

3) That the Olivier’s awarding of prizes to Sugar Sammy and Adib Alkhalidey negate any criticism that “politically correct” activists might have of the blackface sketch. (Two rights don’t erase a wrong.)

5) That because Boucar Diouf himself was not offended by the sketch, it wasn’t offensive. (If some women see wolf whistles and lewd remarks as compliments, that doesn’t mean other women lose the right to find the behaviour offensive, even when directed at women who accept it or don’t see it as an insult.)

Diouf says he has been characterized as a “esclave de maison” (house negro) for his defence of the sketch, just one more example of a debate that has gone completely off the rails.

As Diouf said last Friday in his appearance on Telé-Québec’s 125, Marie-Anne (a must-see interview), “I never said there wasn’t racism in Quebec… It’s the most shared (trait) on the planet.” And proof of that is found in the same broadcast in the form of the eminently detestable and apparently wired Mathieu Bock-Côté defending his recent attack on Sugar Sammy in his Journal de Montréal blog.

Despite all of the above, to claim that racism is generally worse in Quebec than elsewhere in Canada isn’t backed up by any credible studies (more on this next week) and is itself an accusation based on cultural stereotyping and prejudice. ■

Peter Wheeland is a Montreal journalist and stand-up comic. His sardonic observations about the city and province appear every Wednesday in this space. Follow him on Twitter, or find out about his upcoming stand-up performances here.

Here are links to other online contributions to the debate (the Huffington Post is almost the only English-language medium to address the issue so far) :