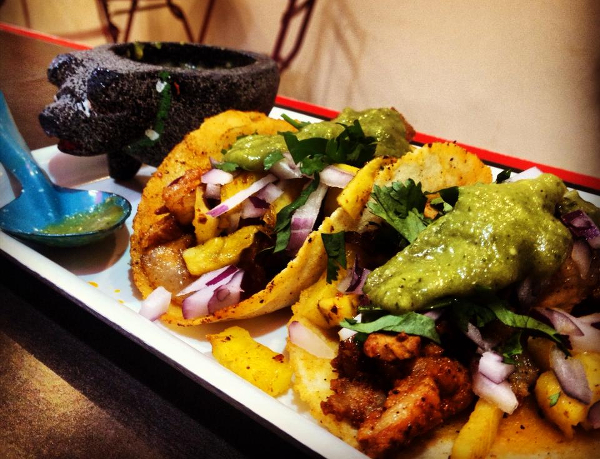 I had originally prepared an introduction in which I discussed the standards of Mexican food in Montreal, but it’s not worth it. La Tamalera, on Fairmount, is one of the better Mexican restaurants I’ve eaten at in this city. It’s slightly more innovative than your run-of-the-mill rice and beans and cheap meat spots (which I love but don’t think exist here anyway) and features a rotating menu punctuated by some atypical dishes. But it’s also unfussy, and even has a few racks of grocery items in addition to its mostly inexpensive menu.

I’ve had alternating experiences so far. The torta de Milanesa ($8) was a bit too tidy: the bread was more of a Portuguese roll than the doughier, more bun-like torta bread I’m used to, and the fillings — black beans, slaw, avocado, mayonnaise — were a little dry next to the already dehydrated steak. The tacos de cochinita ($8) fared a little better. The pork was fork-tender but not totally dissolved, and the tortillas, topped with some sort of pickled onion, swam in a rich sauce. The tacos were a bit salty on the whole, though, and could have benefitted from a side. These both seem to be staples of the menu, and represent what could be classed as a more wholesome vibe — i.e., dishes I ordered in hopes of being exhausted and bloated at the end — but neither fulfilled me in the right way. I can’t totally recommend either.

The flip of this is that la Tamalera excels at breezier styles. The Gazette reports that the owner is a Veracruz native, and while the menu is not too indicative of the Gulf of Mexico, there is something informally seaside about it. There are cheap floral tablecloths and an aloe plant (or sansevieria; I can’t remember and I’m not a botanist, but you know what I mean) and trinkets and tiny bottle cap-type art, like odd items you might find buried in sand. The most effective strategy is to match your order with this feeling. The crunchy hibiscus tacos (tacos de flor de Jamaica, $9.50) were fantastic. Hibiscus is surprisingly really meaty — certainly enough to win over those skeptical about eating a flower — and the tacos were fleshed out with cherry tomato, avocado, slaw, crema Mexicana and a side of black beans (far superior to the ones inside the torta, though they may have been the very same).

The tamales ($2.50 each) are also pretty choice (unsurprisingly, since the place is called la Tamalera, though it took me a second visit to bother to read the sign). I had partially written off Mexican tamales, since they often seem to be pitifully arid and small, with the fillings overwhelmed by the dough (I am generally more down for the stuffed-full, ultra-greasy, burrito-sized Colombian variety). Thankfully, la Tamalera’s were pretty much the opposite of every bad Mexican tamale I’ve had: pillowy, with generous fillings and a moderate moistness from the lard. The chicken in a green, tomatillo-based sauce and pork in a red adobo sauce were near perfectly balanced, and I plan on returning for the jalapeño and cheese edition as well. And it’s difficult to beat that price.

Going by these experiences, I’m coveting dishes like the Baja tacos ($12), with shrimp, next. It’s a fine restaurant as long as you go for mellow side of the menu, which ought to at least help its case as a summer dining option. ■