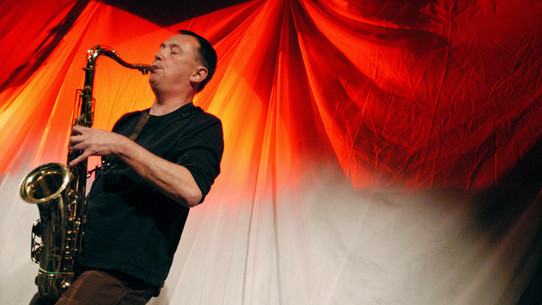 The last several years have seen a renewed interest in the saxophone, with a resurgence of sax ensembles, a reissue of Dickie Landry’s excellent 1977 LP Fifteen Saxophones and the great success of Montreal’s Colin Stetson. The popularity of Stetson’s approach to solo performance and composition has shone some much deserved light on the players who pioneered solo techniques like circular breathing and multiphonics. And there is no one pushing the saxophone forward further than John Butcher.

A key figure in the international free improv scene, Butcher has continued to seek new sounds ever since finishing his PhD in Physics in 1982, applying the same energy and thoughtfulness towards his playing. The preceding generation of London free improvisers like Derek Bailey and Evan Parker had opened the field, leaving Butcher and his peers to experiment with even more radical techniques and collaborations. His solo practice often explores the particulars of his acoustic environment, making use of resonant space by adjusting his playing. His approach to the saxophone is also known for his range of unconventional techniques, including close mic-ing of the keys, or placing a small microphone in the bell of the horn and manipulating feedback rather than blowing through it.

Butcher is in town today to play the Suoni per il Popolo, first tonight in a duo with baritone guitar player Andy Moor of the experimental Dutch punk collective the Ex, and opening the show with a solo set. Tomorrow he’ll lead a workshop discussing and demonstrating his techniques, answering questions and taking part in some group improvisations. (Bring your instruments!)

Butcher’s tool kit of circular breathing, multiphonics and feedback were expansions on what early African-American free jazz and British free improvisers had already developed, but his particular explorations and aesthetic are unique to him. He is always challenging himself with the unfamiliar, and in so doing has extended the range of the saxophone.

“Most westerners, it isn’t clear that they come from any particular musical culture,” he says. “Culture is kind of self-accumulated, very few people actually grow up in what you could call a musical culture that’s really theirs, so you’re drawn to all kinds of places.”

For Butcher, growing up in the U.K. in the ’60s and ’70s, he was exposed to all kinds of music through the radio, eclectic soundworlds that could cover everything from Stockhausen to the Radiophonic Workshop to Ornette Coleman and back. That exposure to British jazz of the period encouraged him to check out what was going on around him, and very quickly he was drawn into live improvisation.

Butcher is an improviser, whether on the stage or in an interview, and improvisation takes on value as a broader ethical practice. “Maybe people sometimes wonder what’s the connection with jazz and some areas of improvisation. It’s really something you learn by doing rather than by studying. Jazz has been destroyed by people studying it. ­­Up until about the late ’60s, it was a kind of music that people learnt by actually doing it by throwing themselves into it.”

Politics and ideology used to be very central to the practice of improvisation. Butcher is clear on this point. “I never thought of improvisation as an idiomatic choice, it’s kind of an ideological choice.” Collective group improvisation demands that each player take into account the intentions and aesthetics of the others, even if this produces contradictions.  It is this collaborative aspect that attracts Butcher, the tension between agreement and confrontation that “brings it alive, uniquely compared to any other kind of music.”

This approach to improvisation is about explicitly challenging the existing musical hierarchies — composer/conductor/performer, solo/backing/rhythm— and other hierarchies by extension. Butcher and his peers are concerned with trying to achieve an equality of contribution regardless of what instrument they play, finding a way to bring “your personality into music in a way that coexists meaningfully with others without any of you being the leader.”

Even solo, he seeks out unusual situations, acoustic spaces and environments, both physical and psychological. “You can get too introspective in solo improvising, one too many familiar paths.” He recalls a recent tour he made of the northern islands of Scotland with Japanese instrument maker Akio Suzuki playing in an abandoned oil tank, an underground reservoir, or against an ancient stone monolith. “It’s a major investment just to get there, so that puts you in a different state of mind rather than just turning up at the Southbank and doing a room.”

Of course, each room is different. “Working in unusual spaces, in a way it’s an exaggeration of what any improviser does. They shape their music according to the acoustics of the space they’re working in. Orchestral players do it as well but they’re kind of stuck with their instructions. The improviser can actually create the music for the space.”

Butcher’s feedback technique is very room dependent, and won’t work in just any space. “Cause and effect is never entirely clear. I’m using the saxophone as a resonating tube, I’m not blowing into it, and altering the length of the tube, i.e. raising and lowering the pads, changes its resonant frequencies. And if you’re lucky you can set up different feedback effects at those different frequencies and sometimes multiple tones.”  Butcher’s controlled feedback manipulations are so modulated that they sound like pure electronic music, but his familiarity with the mechanics of his instrument give him access to an interface with intimacy that few would dream of. “Although it has, if you’d like, the harmonic overtones of the saxophone, it doesn’t have the timbral quality of the saxophone, not being reed-driven. It puts you into the world of loudspeakers, which makes it particularly interesting for me if I’m working with electronic musicians using that technique.”

This fluidity, moving between musical worlds and techniques, is a testament to Butcher’s versatility as an improviser.  As we talk, I wonder if he’d noticed a change in his audience these last few years, but he manages to turn the question around.

“I do notice ostensibly more improvisers who are happier to give quite slick presentations of their activity. For me that’s always seemed that if they know too much of where they’re going, I start losing a bit of interest. But it appeals to audiences.

Things get appropriated, reused, generally their use becomes simplified, more palatable, and that can attract larger audiences, but within those larger audiences some people are more interested in stuff that’s a little more problematic. Those of us who’ve worked at the coalface, often in obscurity for many years, we’re kind of a resurgent development department for stuff that then gets procreated and commercialized and you see that happening as well in quite a few areas of more popular music.

“They keep it clear. I like to muddy the waters more, find things I don’t know about, through the act of playing.” ■