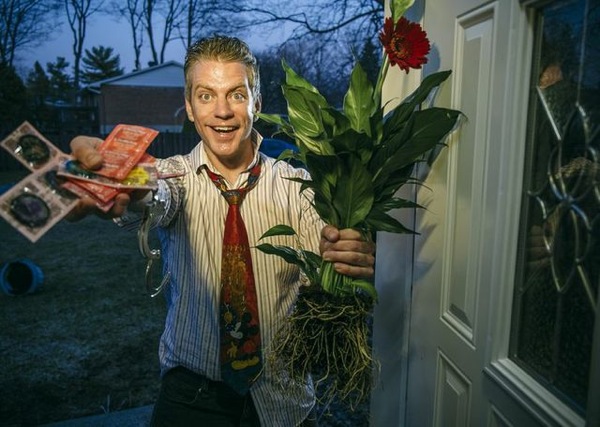 Predicting the Montreal Fringe Fest’s big hits is slightly easier than winning a Powerball lottery, but only slightly. With 700 performances by 200 artists taking place, there’s a smattering of everything. Artistic freedom ensures, well, not only room for great genius to take flight but also, some things that are still en route to their destination. The Fringe for All gives a two minute taste of the local productions (the Out- of-Towner Fringe for All takes place June 13). These were some of the best to cross the stage.

Holy Tranity! A Dirty Love Song to the Gay 80s is a show that could blow me out of the water, or perhaps just blow (mature audience only!). Wide-eyed 17-year-old Jade joins the gay stripping scene as Santo$, only to find out that the party is not quite what he expected. The play takes a look at the arrival of AIDS and AIDS activism next to the long-fought-for sexual liberation that characterized the gay club scene of the 80s.

Love and loss, or even just lack is a common Fringe theme. Now that I Have Your Attention stars local comedian Dan Bingham’s take on romance. Bingham shows us what it’s all about by chainsawing a giant cardboard heart in half. Also, Gerrard Harris in Verbal Diarrhoea asks the question “Do you believe in life after love?” I’m guessing he found his answer. Single Black Female looks at the search for not only love, but also clothes, through the lens of a particular racial demographic. Perhaps you can guess which.

Some shows launch thanks to the sheer personal magnetism of their actors. I couldn’t tell you what The Voice of Wisdom by Gemini Productions is about, but I can tell you that Sydney Shapansky and Veronica Baron will make the connection between true love and the Order of the Solar Temple suicides riveting. Anything with DeAnne Smith’s Horrible Things will not be horrible as long as she is in it along with Leighland Beckman. Jean François Plante in La cravate bleue is not destined to appear on La Voix, but I’d gladly listen to him sing his loveable, nerdy heart out in my car any day.

Bilingual productions? Yes, please. Try The Corner Café. Again, utterly random, but Montreal-specific. The company Tidlidoum behind Règle no 1: Ne pas Craquer won the Fringe Spirit award in 2012. Musical theatre is something Montreal doesn’t get to see enough of. This witty show follows Mr. Lebrun as his life takes a strange turn.

“For dirty deeds, done with sheep,” try the Little Beau Peep Show. This burlesque production is sheer lunacy, falling between crass and camp. I couldn’t tell. But I could tell you that it was one of the weirdest human-sheep interactions I have seen since Gene Wilder played ovephile Dr. Ross in Woody Allen’s Everything You Ever Wanted to Know About Sex. A more conventional burlesque show, if indeed burlesque could ever be called conventional, is Seduce All Humans.

Clocking in during the final minutes of Montreal’s Fringe for All, dancer and director Sarah Peterson showed that they sometimes save the best for second last. With high energy acrobatics, Arti-chaut turns contemporary life into a frenetic ballet.

Montreal’s small companies strut their stuff in fine form. That said, some of the shows by out of towners are equally compelling. Based on past experiences, I would keep my eye on Fire in the Meth Lab, I Think My Heart Needs Glasses, Peter N’Chris Explore Their Bodies and 2 For Tea. ■