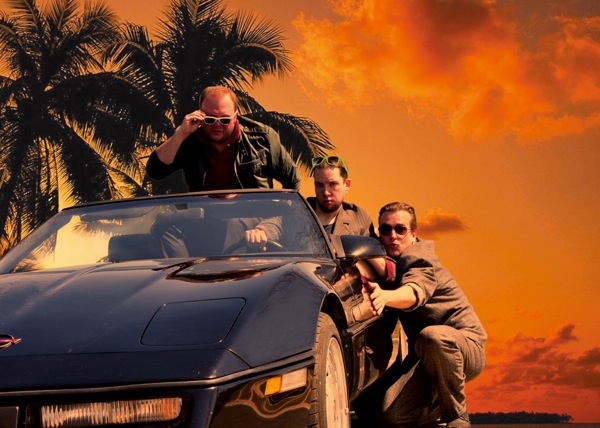 Get Off the Stage Presents: All Their Golden Hits

Fringe fever is upon us. A wall of flyers obscures Parc des Amériques. Bands and storytellers strut their stuff on the outdoor stage to jovial crowds imbibing the St. Ambroisian brew. Volunteers scramble to fix last minute emergencies. And for those who think the party begins at 1 a.m., the 13th Hour is ground zero.

But let’s not forget, first and foremost, the Fringe is meant to support independent artists. Between the sunshine and all those beers, don’t forget to see the shows. Here are a few I caught on the first few days.

My grandparents had a bungalow colony in the Catskill Mountains that brought in variety acts every Saturday night. These Borscht Belt performers used broad plots as their vehicle for song, dance, dirty jokes and general Vaudevillian shtick. I imagine the lovable Yanomi Shoshinz and Cherry Typhoon’s Annoying Visitor to be cut from the same cloth, only finished with a precise, polished Tokyo touch rather than the gritty chutzpah of old Brooklyn Jews.

Mustachioed middle-aged gent Stormy Typhoon’s love of solitude is repeatedly interrupted by annoying visitors. Cartoonish? Yes. But these Fringe faves can bring warmth to even the most absurd situations. The two have enough talent to keep this fun and zany, without lapsing into complete silliness. Just ease up on the Tabernac rap.

Usually, there’s at least one bit in every sketch comedy show better left backstage. Not so for Get Off The Stage Presents: All Their Golden Hits . Every sketch sweats unapologetically with XY-chromosome-ness: space travel, fierce competition (Van Halen’s Roth vs. Hagar, Schwarzenegger lines, authorship of 80s songs), even a guest appearance by Christopher Hitchens. Nothing is sacred. Jesus belts a lapsed devotee and warns him, “If you’re going to act like Mary Magdalene, I’m going to slap you like Mary Magdalene.” There are dance numbers and an 80s soundtrack that only a devoted mix tape maker could obsess over. Very, very, very funny. Makes me wish I could grow a pair and scratch.

Bridget Jones: lone white girl from London hunts for love. Sex and the City: four white girls from NYC hunt for love. Girls: a slightly younger group of white girls from Brooklyn hunt for love. The Golden Girls: just threw that in there. Single Black Female: turns out that #firstworldproblems #cantmeetaman are not limited to a particular demographic. Single women from NYC in their 30s struggle in the search for love (or marriage) against some very depressing statistics. But, hey, depressing statistics are good fodder for personal drama. Gara Nlandu and Letitia Brookes soul search the merits  drawbacks of online dating, well-intended but insensitive family advice, past failed loves (both male and female) and the saving power of a department store and a credit card. The energy is high in this the-political-is-personal (sic) piece.

Elder brother Tim probably wasn’t first in line to win the Mr. Congeniality award. His irritating habits included sticking his dick in his brother’s ear, spitting in his brother’s mouth, and driving away whenever poor Jon went for the car door. Jon, however, gets revenge with Fire in the Meth Lab. In an attempt to make sense of his brother’s not-so-surprising stay in the big house, Jon sifts through Tim’s addictions to find things far more sinister than recreational pharmaceuticals – notably, Australia’s answer to Rick Astley: Jason Donovan. Jon’s love-hate relationship with his older brother shows that growing up the son of a minister in the Australian countryside translates to some weird masturbatory habits.

Keep calm and carry on isn’t a good motto for Gerard Harris. His neuroticism is fuel for the stories that make up Verbal Diarrhoea or: How I Learned to Stop Worrying and Bomb at Love. This storytelling show (along with an impromptu poem) recounts Harris’ finer moments with the ladies from age 5 onwards. By finer moments, of course, we mean, failures and the events that preceded them. For a guy who describes himself as shy, he still manages to see quite a bit of action. Harris is decidedly British — cocky, reserved, witty, and self-deprecating all at the same time. He dives into cerebral analysis of meaning at the end of each story, concluding with profound, and some less profound, observations. Even so, what makes this show is the British mastery of language. With gems like “paying tribute single handedly many times” to a particular picture of a naked girl or avoiding “cruel middle class boys who grew up to be Britain’s greatest accounts and consultants,” Harris shows himself to carry a little Shakespeare in his heart, no matter where he lives. Incidentally, the stylish and mermaid-creeping comedian Dan Bingham puts an Irish-Catholic spin on the same subject with Now That I Have Your Attention. Bingham not only keeps your attention from his first sentence to the last, but he delivers his tales of shame and longing with Ginsu-edged wit.

Participatory theatre? Yes, please. Put on your birthday hat and take a seat at the table for Leslie Moira Duncanaine’s birthday party in Talk, Mackerel. If you’re lucky, you’ll get a jellybean. Poor Leslie’s not had the easiest life.  She’s not that popular, her best friend is moving away and her mom (mam) killed her dad. But, like any good Maritimer in a storm, Leslie isn’t easily sunk. She plays trombone and talks to the pictures of her ancestors on the walls. This creative character study shows that writer and director Sarah Segal-Lazar is one to watch. And damn, can she sing!

Other notable mentions: Philosophy meets power point while camping: Third Person. Illuminati and the devil meet power point in a rock exposé: Alex Cross and his Rise to Fame. Tough but tender, Liz Burns as Red fires a pistol through the heart in the search for her former co-conspirator Grizzly in Crossdressers and Criminals.

I have to mention one final show, though the next place you can catch it is at Edinburgh’s Fringe. Wandering about with a red fez and a sash, festival spokesperson Johanna Nutter is taking her moving, never-predictable My Pregnant Brother to the U.K. The story is one of a kind (her transsexual brother gets pregnant and that’s just the beginning!), but the themes of family and addressing our deepest longings, are universal. Nutter currently has an indiegogo campaign to raise funds for her trips, so show some love for a Montreal girl and drop a virtual dollar in the hat, yo. ■

The Fringe Festival continues to June 23.