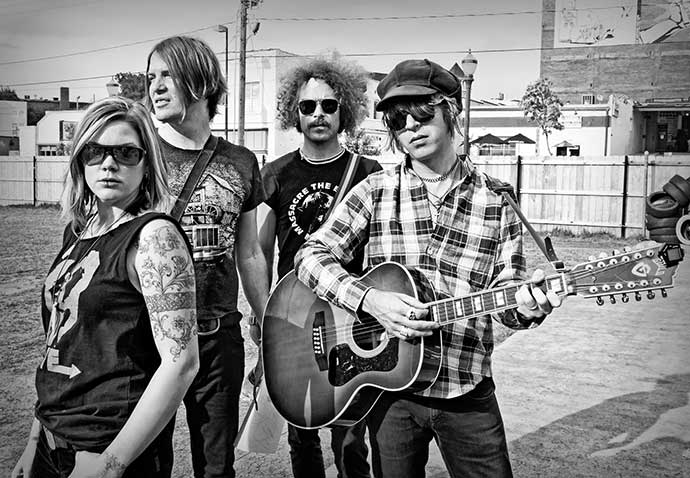 The Dandy Warhols are back on the road, playing probably their best-known record, 2000’s Thirteen Tales From Urban Bohemia, in its entirety. It’s the album that featured the Portland band’s biggest North American single, “Bohemian Like You” (a song that even your mom could probably hum), and “Godless” — if you remember the days when music videos aired on television, you might recall the vaguely hypnotic image of a sensuously slow hula-hooping gay bro in the video for the latter song. So awkward, but so right.

And that’s pretty much how Dandy Warhols guitarist Pete Holmström feels about this tour. I reached him as the band was about to soundcheck in NYC last Thursday.

Lorraine Carpenter: How has the tour been going so far?
Pete Holmström: At this point, it keeps getting better, just ’cause it is a brand-new thing that we’re trying to do. It’s still very weird for us to have to stick to a set-list no matter what — we told the world, pretty much, that we were gonna play these 13 songs in this order every night, so we just have to do it. I think it’s gonna be a great challenge for us, ’cause typically if something goes wrong even slightly, we would tend to change it the next time, and we can’t do that now.

LC: You’re about to release an expanded version of the album, with lots of bonus material. Are you playing any of that?
PH: No, we’re not, actually. We were going to be playing a bunch of the B-sides, some of the other tracks from that era, but as it turns out we’re only doing one of those in the second set.

LC: Second set? So it’s a really long encore?
PH: It’s been anywhere from six to 10 songs — it’s essentially another set. Maybe not quite an hour, but getting close to it.

LC: So I guess that’s the more typical Dandy Warhols part of the show.

PH: Yeah, the second set is pretty much what we normally do — it’s a little more freeform. So we have that as our little treat for making it through the work part. But so far the reaction has been really great; everybody seems to be really enjoying it. And we’ve got two extra musicians out with us, and that has been pretty awesome, too.

LC: Is the second set totally unplanned, or do you have a set pool of options that you draw from?

PH: A bit of both. We have a bunch of songs that we’re prepared to do, and then, each night so far, some people have just yelled out songs and then we’ve tossed those in there as well.

LC: This record seems like an obvious choice for you guys to tour, because it was such a big record, and those singles were pretty huge. Then there’s the 13th anniversary angle. Are there other reasons why you chose this record?
PH: It’s kind of the only one that would actually work. I think that if we tried to do it with [Welcome to the] Monkey House, we would have a really hard time recreating the sounds because it was all so much keyboard stuff that none of us really know how to do, or none of us know how to redo. And the earlier records, there were so many extra layers of guitars and stuff that we’d have to have like five people just to try and recreate it. It just wouldn’t be feasible. It’s been a fun challenge, and I don’t know if any of us would do it again [laughs]. Just because it takes out so much of the freeform, the creative part of playing shows that we really like, and puts the emphasis on the actual performance of the parts, which is good, too, but is just not something that we’re used to. We haven’t made a career out of it.

LC: What’s next for you guys?
PH: We’ve already started working on the next record. I think Courtney was hit with a little burst of songwriting, so we’ve got a large chunk of songs where at least the ideas are starting to form. So it’s pretty cool. And then next year’s our 20th anniversary, so we’re gonna try to do something. What that is, I have no idea. Wait and see. ■