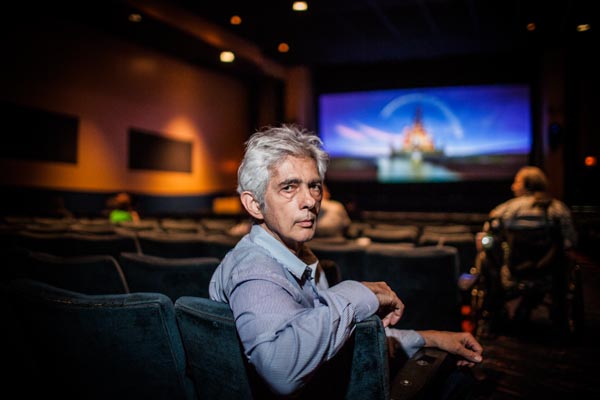 Bernie Gurberg at the Dollar Cinema, No. 4 Best Repertory/Art House Cinema and No. 8 Best Cinema. Photo by Will Lew.

Bernie Gurberg is a bit of a local legend. Even if you don’t know him by name, “the Dollar Cinema guy” should call him to mind. He opened the cinema in 2004 and has since offered second-run films for a low cost ($2.50), as well as the treats to accompany the viewing experience ($1 +tax) — making his establishment one of the cheapest options for a night out of entertainment in Montreal. It’s no wonder he made it onto the Best of MTL readers poll.

Gurberg is a fascinating man. And we’re not the only ones who think so — look no further than the Victor Vargas Villafuerte five-minute documentary from 2011, simply titled Bernie.

But when we spoke to him for our last print issue, he let us know that he had a scoop and that we could be the first to unleash the news. His lawyer (and now business partner) Leon Maliniak has discovered the cure for baldness: the Maliniak Method.

Gurberg himself has not used the method as he has been gifted with a lush full head of hair, but his brother wasn’t so lucky. “My brother, his hair went away and mine stayed. Even Prince William, he doesn’t have to be bald. People as intelligent and in as high positions as him can’t stop losing their hair. I’m telling you that you have breaking news, that that’s over.”

My attempts to speak to Leon Maliniak about the method this week were thwarted by a particularly demanding client calling him from Mexico. But Gurberg was happy to fill us in. “As soon as people look at it, they just think ‘Ah, it’s a scam’ because they’ve been scammed already, every single time. Because everything else out there — snake oils and that — don’t work.”

“Leon is very spiritual. He spent 30 years trying to figure this out. When he was 22 years old, his hair was falling out. When he was 62, he finally got the answer. One day he got a message. You know where the message came from? The big guy. The guy in the sky. And the guy said to him, ‘Look at the shape of your baldness.’ You know what the shape is? It’s like a horseshoe. Most guys that are bald are losing it that way, in a horseshoe shape. So the message was: look at that, the shape. So then he studied the layers of the scalp and the skin. The third layer down in your scalp, there’s a thing, or a membrane called a galea. It’s the shape of that, a horseshoe. So he thought, ‘You’re the problem — what are you doing?’”

According to Gurberg, the galea over time stretches or pulls, creating a choking effect on hair follicles which stops them from growing. So he’s developed a method without drugs, surgery or lotions — just a massage routine that stops the follicles from being choked. “He never would have figured that out without the message. You got a story here that’s spiritual and that’s true and that’s no drugs,” says Gurberg. They also have a machine that vibrates hair follicles that have been dormant for a long time.

The medical miracles don’t stop there for the Maliniak and Gurberg team. The next cure is kind of unbelievable. “His main reason for this thing is to get enough money because he’s going to fund a laboratory. He has the cure for cancer,” says Gurberg. “I know you can’t believe that either, but he showed he has the cure for baldness. That he did, and I can show you. For the cure for cancer, he has to spend $2-million to get a laboratory to do what he needs to do. He knows what to do and he has it all ready. He just has to prove it, because that’s a major situation, cancer. But that’s why he’s doing the book; not for the money, but for the money to do that other thing.

“He’s a motivated guy and that’s what his life is all about. He cured his own daughter of leukemia 20 years ago when she was three years old. They told him that she was finished, she’s doomed, that she’s got this terminal leukemia. And he said, ‘Don’t touch her’ and they left her alone. He went and studied 900 cases, it’s documented. And he said, ‘Okay now, this is what we’re going to do,’ and she’s perfect and she’s alive.” ■

The Dollar Cinema is located at 6900 Décarie Square.